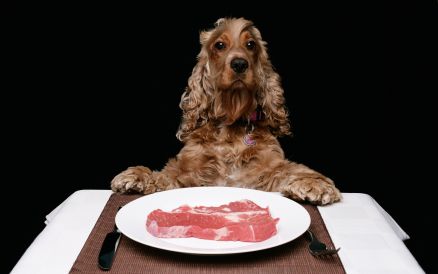 Raw Food Diet for Dogs – discover everything you need to know about feeding your dog uncooked meat, organs and fresh bones – or also known as the BARF diet.

This particular diet plan has it’s fans and detractors – to explain exactly what is involved when choosing this diet we have covered every aspect from explaining what you can feed your dog, how to choose the best ingredients and some great raw homemade food recipes too!

A raw food diet for dogs is in a nut shell the process of feeding your dog a diet of ‘Raw’ or uncooked meat, bones and organs. Many people who support this method do so because they feel that a raw diet has significant health benefits for your beloved dog including glossier and healthier coat, healthier teeth, better gums, fresher breath, less poop (that smells better) – basically a healthier dog!

Supporters of raw dog food diets argue that when dogs were living in the wild in packs centuries ago they fed and lived on raw meat i.e. carcasses decedents of these wild dogs should do what comes naturally i.e. eat raw meat. However, people that are against feeding their dogs this diet argue that there are significant health risks associated with feeding a dog raw meat, organs and bones including perforations in the intestines, a lack of appropriate nutrients and bacteria passed onto the dogs from the handling of raw meat.

One of the leading advocates of a raw food diet for dogs is Dr Billinghurst who argues that dogs have evolved over millions of years on a completely raw diet – he has since developed his trademark diet plan referred to as the BARF diet which stands for ‘Bones and Raw Dog Food’.

Many supporters of the raw diet argue that commercially produced dog food loses allot of the most important vitamins, minerals, nutrients and even enzymes through the extreme heating process that is involved when the tinned commercial dog food is produced. Even after supplements are added to the canned dog food detractors still argue that it is still inferior to the natural vitamins and minerals present in uncooked raw food.

Another problem that detractors dislike about commercially produced dog food is the use of grain in the food – mainly because grain is not something that dogs would eat in the past due to the difficulty that they had digesting the grain. One Vet that advocates the use of a raw food diet for dogs argues that dogs are not able to process the grains found in commercial dog food due to lacking the enzymes needed to digest them. Also with commercial dog food cooked at high temperatures the starch, protein and fat become denatured mainly because the badly digested grain can then lead to bacteria (toxins) being produced causing blood to pass through the dogs bowel.

Another argument that supporters put forward for feeding dogs raw food is the positive benefits that the chewing action dogs use to break up and ground down the bones. By chewing the meat supporters argue that it helps to scrape dental plaque off of the teeth (effectively brushing the dogs teeth). Also the ligaments and tendons found in the raw meat and organs act as a natural dental floss removing old food and plaque from in between the teeth. The  constant chewing of the bones and tough meat also helps to strengthen the jaw, neck and shoulders.

Raw Food Diet for Dogs – What you can feed your dog…

Below is a list of what you can feed your dog…

Of course a raw food diet for dogs should always only use raw and uncooked meat and fresh bones – although many homemade raw food recipes can contain eggs with the shells included.

Experts estimate that the minimum amount of raw meat in a raw food diet should be around 60-80% – but to further break this down 35% of the diet should be meat (that includes muscle meat for chewing), 20% fat and skin and 20% organs.

But what about bones?

You can feed your dog fresh bones (although you should always check with your vet just to make sure). However, never feed your dog bones that have been hanging around for long periods of time as they become brittle and more likely to perforate the intestine or cause other problems. Of course it is the same with Chicken Bones – as long as they are fresh they should be absolutely fine. Just remember that fresh bones are much easier to digest – and do NOT feed your dog cooked bones!

Can you add vegetables to a raw diet?

Yes you can add vegetables to your dogs diet including Celery, Cabbage, Lettuce, Carrots, Squash, Asparagus and even Broccoli – but bear in mind that Broccoli can cause excessive wind in dogs. The best place to get the meat and vegetables for your dogs diet is exactly where you would do your shopping – if it’s good enough for you it should be good enough for your dog – mainly because you would not expect your Butcher or local store to sell you poor meat and veg.

Remember if you ever handle raw meat make sure that you clean the area properly – use white vinegar this will kill any bacteria. Below is a list of the things that you should NOT feed your dog.

Some Risks Associated with a Raw Food Diet for Dogs

The transition from feeding your dog a commercially produced dog food to a raw food diet for dogs should be over a period of time and not over night. Start by adding raw meat to the commercial food you are feeding your dog but slowly add more and more raw meat until it is completely raw – this should take a few weeks.

It is important to mention that dogs in the 21st Century are pets and their digestive system is very different to when dogs were in the wild – if your dog struggles with the raw diet then discontinue it. Make sure that you always speak to your vet before you change your dog’s diet