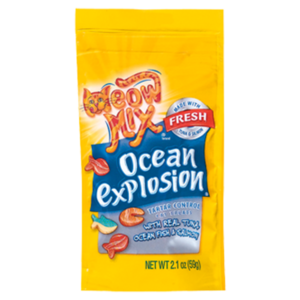 Disclosure: PawDiet may have an affiliate relationship with retailers featured (or linked-to) in this article. We are compensated for referring customers. Thank you for shopping with our retail partners!

The second ingredient is wheat flour. Wheat flour is produced by grinding uncooked wheat into a powder. In addition to dietary fiber, wheat flour provides various vitamins, minerals, and plant based protein.

Wheat is considered a controversial ingredient because of it's protein content. Plant based proteins degrade the overall protein quality in the product. In addition, many people believe wheat is one of the most common ingredients to cause food allergies or intolerance. However, grains such as wheat are typically low offenders in comparison to certain protein sources such as beef.

The third ingredient is ground brewers rice. Brewer's rice is the small fragments of rice kernel that are separated from the larger kernels of milled rice. The fragments do not contain the same nutrition profile of the whole kernel and therefore brewer's rice is a lower quality grain. Brewer's rice is typically regarded as an inexpensive and low quality filler.

The fourth ingredient is soybean flour. Soybean flour contains more than 50% protein. Therefore, soybean can significantly boost the protein content of the product. The inclusion of non-meat protein typically degrades the overall quality of protein in the recipe. This degradation is due to the inferior amino acid profile of plant based proteins.

The fifth ingredient is animal fat (preserved with mixed tocopherols). Animal fat is a by-product of tissue rendering. The source animal is not specific and therefore we cannot be certain that the source does not include diseased animals or even euthanized dogs and cats.

Next we have tuna. Although tuna is an excellent protein source, raw tuna contains more than 60% moisture. After cooking, the relative meat contribution of tuna is dramatically reduced. Therefore, it's important to ensure that other meat sources are included within the first few ingredients to ensure the product derives most of its protein from meat.

The next ingredient is ocean fish. Ocean fish can refer to multiple species of fish, since the particular type of fish is not specified, it's difficult to discuss this ingredient. The nutritional contribution of ocean fish depends on the species included; however, fish generally provides high quality protein and fat.

Then we have salmon. Salmon is another excellent protein and omega-3 fatty acid source. As with other raw meats, salmon contains a substantial amount of moisture and therefore the relative meat contribution of salmon is dramatically reduced after cooking.

Our next ingredient is animal digest. Animal digest is the result of undecomposed animal tissue after hydrolysis, a chemical reaction. It is typically used as flavoring to improve taste. Animal digest is considered by many as an undesirable low-quality ingredient. What's more, the source animal is not specified and therefore animal digest can contain almost any animal, including dogs and cats!

dried egg product is the next ingredient in this recipe. Dried egg product consists of shell-free eggs which are easy to digest and contain high quality protein. Egg protein is often given the highest biological value (BV). The BV metric measures the usability of the ingredient's protein.

Red 40 is the most widely used artificial dye in consumer goods. Studies have shown that red 40 may accelerate the appearance of immune-system tumors in mice, cause allergy-like reactions and trigger hyperactivity in children.

Yellow 6 is an artificial food dye which may be contaminated with cancer-causing chemicals. According to the Center For Science In The Public Interest, yellow 6 can cause adrenal tumors in animals.

Butylated hydroxyanisole (BHA) is an artificial preservative and possible cancer-causing agent. Studies have show that BHA can be linked to various tumors in laboratory animals.

Butylated hydroxytoluene (BHT) is an artificial preservative and possible cancer-causing agent. BHT is banned in several countries, but the FDA has classified BHT as "generally recognized as safe."

Blue 1 is an artificial dye with serious but unconfirmed health concerns. Like other dyes, blue 1 does not provide any nutritional value.