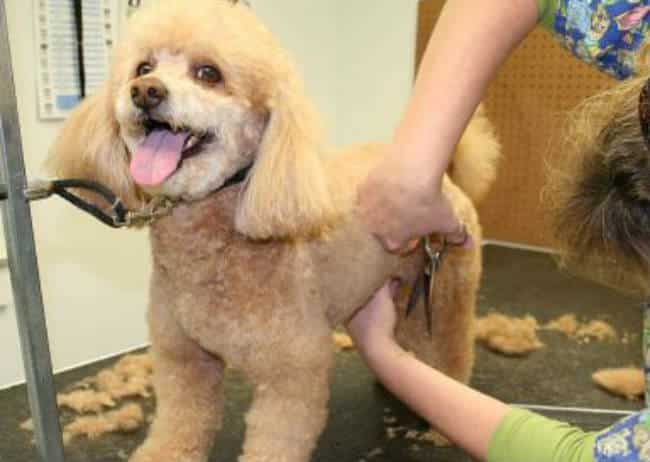 If your beloved canine develops dry skin it could be due to a number of problems (most of which we have listed on this page).

Dry skin can lead to pretty horrific symptoms, some of which are easy to cure and some that are more tricky. Every single dog (yes even yours) has had Fleas at some point. Of course although Fleas are easy to treat, did you know that the nasty little parasites can infest your House (and live in your carpet for months). So that you get a really good idea about all of the dry skin conditions listed on this page we have provided a few pictures too (some of which are very unpleasant).

Canine Dry Skin: Just some of the conditions that can affect your pooch

Symptoms: Often caused by a parasitic, allergic or hormonal condition.

Symptoms: Impetigo, thickening of the end of the nose & foot pads. The scaling that affects the nose (including the thickened foot pads) is Nasodigital hyperkeratosis.

Symptoms: Frantic itching, listlessness, hair loss, crusty scaly skin. All of the pictures on this page of dogs suffering from Sarcoptic Mange.

Symptoms: Redness of the skin, scales that are greasy, hyper pigmentation. This condition was first diagnosed in 1991. This is a similar dry skin condition that affects humans (although in humans it is caused by Candida albicans. Malassezia is a yeast infection and is primarily seen in certain breeds including Dachshunds, West Highland Terriers and Basset Hounds. This condition is very itchy and commonly affects the areas around the face, armpits, groin, feet and legs. In fact it is the ears that are more commonly affected (often leading to a build-up of grease). Malassezia responds well to topical creams, shampoos and oral antifungal medications.

Symptoms: Scaly skin, hair loss, ulcers appearing on the nose & ears. This particularly unpleasant condition can also lead to a fever and is treated with antimony-based medications. Leismaniasis is often seen in South America, India and Africa.

Symptoms: Skin will have lesions including ulcers on the foot pads, scaly skin and bacteria infections that are recurring. Lupus is a very serious condition which can lead to Kidney failure. If you would like to learn more about this condition you can read more on Wikepedia.

Symptoms: This condition affects only black hair which will then fall out. Scaly skin may also occur. Symptoms normally occur and appear between the ages of 3-6 weeks.

Symptoms: This affects areas of the skin that touches the ground causing itching, hair loss, redness and crusty scaly skin.

Treatment for dry skin conditions may include the following…

When dealing with any canine dry skin condition including a yeast infection always get advice from your vet and don’t use any treatments until you have had professional advice.

Hives: are another fairly common dry skin condition seen in dogs. Hives is caused by an allergic reaction which causes a raised (itchy) circular patch that appears on the face and around the body.

The most common causes of Hives are via insect bites (but they can be caused by other allergens in your dog’s environment. Treatment normally involves a dose of antihistamines. Please bear in mind that antibiotics can also cause Hives.

Lick Granuloma: also known as (Acral Lick Dermatitis) is caused by dogs that consistently lick the same area. Certain breeds are more prone to the condition including Labrador Retrievers, Irish Setters, Great Danes and Doberman Pinschers. Although there has not been a genetic link confirmed there is some evidence that dogs with ‘nerve deficits’ are more prone to Lick Granuloma.

Damp Hay Itch: also known as Pelodera Dermatitis is caused by a nasty little parasite that burrows into the skin (especially around the chest, abdomen and feet) leading to very itchy and dry skin. Damp Hay Itch is caused by a parasitic larvae that is found in decaying hay and straw. Treatment for this condition can include Benzoyl Peroxide Shampoos being administered.

Chiggers: are caused by Trombiculid Mites  (and is also known as Harvest Mites or Red Bugs). Dogs that are walked in forested areas (in late Summer) can become infested as this is a prime area and time for Chiggers to reproduce.

If you are unsure whether your dog has Chiggers you should examine the areas between the toes, ears and mouth (the little parasites are normally red, orange or yellow in color). A dog with Chiggers can develop sores and scabs that are intensively itchy. Treatment will normally involve the coat being treated with a Pyrethrin shampoo or a Lime Sulfur Dip.

Lice: also known as Pediculosis are actually fairly rare in dogs. Lice are more common in dogs that are badly looked after (as the Lice tend to accumulate in matted hair especially around the eyes, head, neck and shoulders. Lice causes intensive itching and can lead to hair falling out in patches. There are two species of Lice including those that bite and those that suck.

Hypothyroidism: can lead to serious hair loss (but without the itching). Thyroid problems can also lead to skin changes that are the same on both sides of the body.

Seborrhea: is a skin condition that is Primary or Secondary. Seborrhea is characterized by dry skin flakes that shed from the hair and epidermis. The skin flakes can be dry or oily/greasy. If the affected dog has a greasy, oily skin then it could be due to an over production of Sebum (caused by the Sebaceous glands). Seborrhea often affects the areas around the elbows, hocks, neck, chest and ears.

Puppies that develop Acne are normally aged 3 months (or older). Puppy Acne is normally purple in color with red pustules and blackheads that also burst. The Acne is often seen on the chin and lower lip.