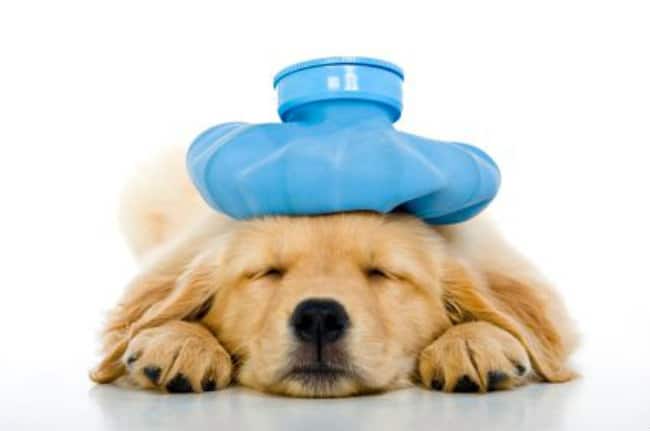 For your canine oral cancer is more common than most other types of cancers (in fact it is estimated that six percent of all cancers are found in the mouth – which is actually a quite a significant percentage). Of course as with all tumors they can be benign (non-cancerous) or malignant (cancerous).

The most common types of tumors found in the mouth are Oral Fibrosarcoma, Melanoma, Oral Squamous Cell Carcinoma and Osteosarcoma.

About Melanoma In Dogs

The general treatment for this type of cancer will depend on the size of the tumor and whether it has spread. The vet will start by surgically removing the growth but if the cancer has spread to other areas then radiation and/or chemotherapy may need to be undertaken.

What Causes Melanoma In Dogs?

Melanomas are caused by melanin producing cells in your dog or puppy’s skin – although as previously mentioned the growths are normally dark in color (black) but they can also be unpigmented (although unpigmented melanomas are rare). A melanoma in the mouth is nearly always malignant (cancerous) with the prognosis extremely poor for an affected dog.

About Squamous Cell Carcinomas In Dogs

Squamous Cell Carcinomas are often caused by exposure to ultraviolet radiation in sunlight. Although the tumors can be found in most areas of the body such as the belly, scrotum, nail beds and trunk they can develop on the lips and at the front of the mouth (the tumors can also develop inside the back of the mouth where they are difficult to remove leading to a poor outcome and prognosis for the affected dog).

About Osteosarcoma In Dogs

This type of cancer (tumor) is probably the most common types of malignant cancers seen in dogs. Although Osteosarcomas can affect dogs at any age they average age of onset for the cancer is the age of eight years of age. Interestingly larger breeds (weighing over 25 pounds) are sixty times more likely to develop the disease – larger (more predisposed breeds) include Newfoundlands, Great Danes, St Bernards and Great Pyrenees.

Slightly smaller breeds like Irish Setters and Boxers are eight times less likely to develop Osteosarcomas. This type of growth can not only affect a dog’s upper jaw (the maxilla and the lower jaw i.e. the mandible) they can also be found in the bones, on the ribs, on the back leg bones and also on the front leg bones.

Treatment can include the removal of the affected bones including the removal of some of the ribs (if they are affected) and even the amputation of some of the legs if the cancer has spread to these areas. Although amputation may not always cure the disease if chemotherapy is performed alongside the surgery then the treatment may be more effective. If the cancer has spread then radiation therapy may also be performed. In relation to cancer of the upper or lower jaw – the jaw bones may need to be surgically removed.

Some of the most common benign tumors to grow in the mouth are Epulis tumors (shown in the picture on the left) and Oral Papillomas (warts). Epulis tumors grow and develop as a response to the gums becoming inflamed and will develop from the periodontal membrane (the tumors will often grow on a tissue flap). There are normally multiple growths in one location and the tumors are rarely malignant.

These are small warts that develop on the lips and in the mouths of young dogs (in fact most dogs affected by oral papillomas are below the age of two). These warts are caused by the oral papilloma virus and are painless and often pink in color.

However, as the warts develop (within about 4-6 weeks) they will become larger, rougher in appearance and will ofen lose their pink color becoming grey or white (as seen in the photo on the left).

It is possible for a dog to have as many as 100 warts in a single area and although they will normally disappear on their own they can be surgically removed or frozen – Chemotherapy can also sometimes be used. The warts will not reappear as the immune system produces antibodies to stop an reinfection from taking place.

These are actually quite rare and although nearly all are malignant there is a type of benign tumor known as a Leiomyoma. If the tumor (cancer) has spread to the dog’s lymph nodes then this can start to put pressure on the esophagus causing an obstruction. The most common treatment for this type of tumor will involve surgery.

Canine oral cancer is a very serious health condition and in all cases will need the owner to get advice from a vet.

Diet can be helpful in controlling cancer. Experts recommend that a cancer busting diet should have a medium amount of carbohydrates (complex sugars) and a limited amount of simple sugars. The ideal diet should also contain moderate amounts of highly digestible proteins and a set amount of specific types of fats. By choosing this type of diet it helps to keep normal cells nice and healthy but also starves cancer cells. Speak to your vet about the best dog food but some experts recommend n/d made by ‘Hills’.

Benign (non-cancerous) tumors are actually fairly common in dogs. In fact it is estimated that they account for 5% of all oral tumors to affect dogs. The most common types of benign tumors to are Epulis, Gingival hyperplasia and Ameloblastomas.

Gingival hyperplasia is a gum condition that is more common in larger breeds including Collies. The condition causes an overgrowth of gum tissue and although in many cases it may not need to be treated if it is not causing any harm. However, if the condition leads to periodontal disease it may need surgery (normally through electrosurgery where the tissue is cauterized).

It is estimated that 99% of cancers that affect dogs occur in dogs that are middle-aged or older. The reason behind this increased risk is due to the immune system in older dogs being less effective. For Cancer to develop a complex series of events needs to take place,(this may involve the dog being exposed to a ‘trigger’ such as the sun or because the affected dog has an increased genetic risk to developing the disease).

Of course younger dogs have a strong and active immune system which is far more effective at fighting cancerous cells. Basically in a healthy immune system these cancer fighting cells will destroy any mutated or abnormal cell that comes into it’s path (this means that the cancerous cells are not able to accumulate and form a tumor). However, in older dogs the immune system is far less effective in locating and destroying these cells so they are more capable of forming a growth such as ac cancerous tumor.