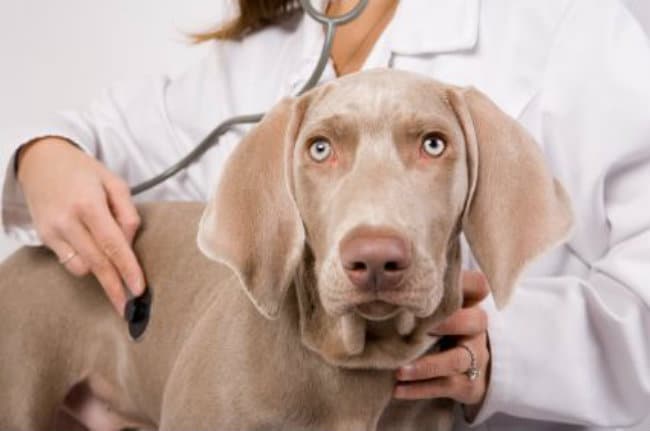 Canine Papilloma Virus (CPV) is an unpleasant skin condition that is characterized by warts. These warts can accumulate around the eyes, ears, muzzle, eye lids, mouth and even on a dog’s feet. This condition often affects dog’s whose immune system has not developed to a level where the illness can be kept at bay or where your dog’s immune system is particularly weak.

The warts will often disappear without treatment but in very rare cases they can be malignant. The warts are relatively easy to spot mainly because they have a similar appearance to a Cauliflower.

Read on to learn more about this illness..

The Symptoms of CPV…

As previously mentioned the Papilloma Virus is characterized by warts that look similar to the Cauliflower vegetable. This condition has an incubation period of approximately two to three months and it is not possible for a human to pass it on to a dog or vice versa.

It is common for multiple warts to develop that affect a particular area whether it is around the muzzle, eyes (lids), mouth, ears or on the feet. Each growth will appear from a base that is normally colored grey. In older dogs the Papilloma Virus normally affects areas around the face whereas in younger dogs the warts will normally affect areas around the mouth and eyes. Older dogs that develop the condition may experience growths that are more prominent and grow larger.

As previously mentioned CPV is not transmitted from humans to dogs or vice versa (sometimes referred to as Zoonosis or Zoonoses). This condition is only transmitted from dog to dog when they have been in close contact. For a dog to get infected with the virus it needs to have an immune system that is weak or has not developed to a mature level. If your dog’s immediate environment has become infected with the Papilloma Virus this can be transmitted to your dog (if their immune system is not strong enough to fight off the virus).

It is also important to mention that a dog might have the virus without showing any symptoms (mainly due to the incubation period of two months).

If your dog is showing the symptoms of the condition i.e. the warts it is important that you keep your dog away from young puppies and older dogs (because their immune system is weaker). You will need to do this for up to two months because of the incubation period. If your dog’s immediate environment has become infected it is possible for the virus to survive for two months in any untreated environment.

CPV is normally diagnosed through a physical examination normally through a small biopsy. This will also determine whether or not the growth is malignant, harmless, or infected with the papilloma virus.

Normally the virus can go untreated – however if the warts have become intrusive and are affecting how your dog swallows or how your dog sees (through infection around the eye lids) then it might be necessary for the vet to surgically remove the warts. The warts will normally disappear on their own but this can take anywhere from three to five months.

– If the warts are causing problems (as mentioned above) they might be removed using a variety of techniques – for example some vets advocate the use of squeezing the growths so that it triggers the dog’s immune system to start to fight against the virus – this can work on occasions but can also fail too.

– Another technique used to remove the growths is when they are frozen of cryogenically.

– A new treatment that is still in its early stages is a medication called Azithromycin – this has been shown to be highly effective but is still considered controversial.

If you have any concerns that your dog has the condition speak to your vet. As previously mentioned the incubation period can last for a couple of months with no obvious symptoms – if however warts do appear make sure that you keep your dog away from young puppies and older dogs.

What’s the difference between a Papilloma and a Lipoma…?

“Papillomas are Wartlike growths caused by the Papilloma Virus” which causes the Warts to develop in small groups (normally around the mouth).

“Lipomas are fatty tumors that tend to show up on middle-aged to senior dogs”. Lipomas can affect dogs of all sizes (small and large) and tend to develop around the rib cage area and on the body wall. Lipomas can grow really large and can actually grow so large that they affect the dog’s movement.

There are numerous remedies that you can use from home to reduce the symptoms of Warts. Below are a few simple techniques you can utilize. Each treatment depends on the size and color of the Wart.

1. If the Wart is soft and meaty then use Dulcamara-Injeel.

2. If the Wart has a hard stem then use Causticum-Injeel.

3. If the Wart is Cauliflower shaped then use Thuja-Injeel.

Bach remedies can also be beneficial including Crab Apple.

1. Calcarea Carbonica 30c – This is a useful remedy for Warts and Polyps that affect young obese dogs.

3. Thuja 30c – is a great for treating Warts and Polyps that are either internal or external.

Thornton K and Eldredge, D, 2005. The Everything Dog Health Book.