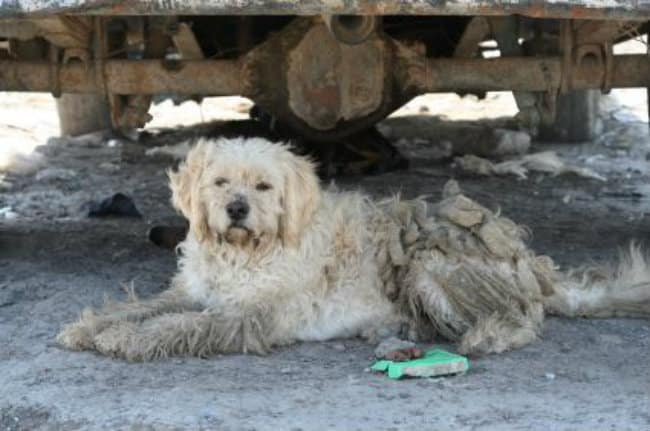 In general the skin disease causes flakes of dead skin to start shedding from the afflicted dog’s epidermis and also from the actual hair follicles. The flakes of dead skin can be dry and similar to dandruff or greasy with an oil like appearance. The greasy form of canine Seborrhea is actually caused by the dog or puppy’s Sebaceous Glands producing too much sebum. This excessive over production of sebum is the common cause of the nasty doggie smell that is normally found alongside the Seborrhea.

Primary Seborrhea is often seen in specific breeds especially Labrador Retrievers, American Cocker Spaniels, Basset Hounds, German Shepherds, English Springer Spaniels and Chinese Shar-pei (although it is important to mention that it can be seen in other breeds too).

It is possible that a dog affected by Seborrhea has the dry and flaky form of the disease or the oily type (or a combination of both at the same time). With the dry and flaky form of the skin disease the dead skin will fall very esily from the body – however the greasy form will often cause the hair follicles to become blocked as the skin cells are more greasy and tend to stick to the body more easily.

With the greasy form of the condition as the hair follicles become blocked they can become infected which can then lead to another condition called Folliculitis.

It is also more common for certain areas on the dog’s body to become more easily affected by Seborrhea especially around the neck, back of the elbows, hocks, chest and around the ears. As the oily form progresses it is possible for wax to start to build-up in the ear canals causing a condition known as Ceruminous Otitis.

Although Primary canine Seborrhea is incurable it can be treated through a variety of different methods. The most common treatment for the condition is to try and control the formation of the scales – this is often achieved through Antiseborrheic skin products and medicated shampoos. If the affected dog has a mild case of the condition it maybe treatable through hypoallergenic shampoos (these types of shampoos only use natural ingredients and do not contain dyes, fragrances or ingredients that may exacerbate the condition).

It might be possible for the vet to prescribe or recommend skin products that also help to rehydrate the dog’s skin to avoid the dry flaky appearance.

If the affected dog has a really bad case of the dry flaky form there are more powerful shampoos that can be prescribed including shampoos that have Salicylic acid and Sulphur as part of their ingredients to help remove the skin scales. If the dog has the oily form of Seborrhea then the vet may prescribe or recommend a shampoo that contains Coal which can actually reduce the progression of scale production. Another very good shampoo to help treat the oily form is Benzoyl Peroxide Shampoo which can not only flush through the hair pores but also help to remove the greasy scales that stick to the shafts of hair.

If the afflicted dog develops other secondary skin infections including Folliculitis then antibiotics may need to be prescribed. If the dog or puppy is experiencing severe itching then the vet may prescribe a course of Corticosteroids. Natural treatment that can help to reduce the severity of the condition sometimes through dietary supplements like Omega-3 essential fatty acids.

Secondary Canine Seborrhea is a completely separate condition to the primary form. Secondary canine Seborrhea will develop as a consequence of another skin condition triggering the seborrheic process – this could be through Scabies, Flea allergies, Hypothyroidism, Food allergy and hypersensitivity dermatitis. This form will normally cure itself as the primary skin disease is treated. If not it should be treated using the same methods used in the treatment of Primary Seborrhea.