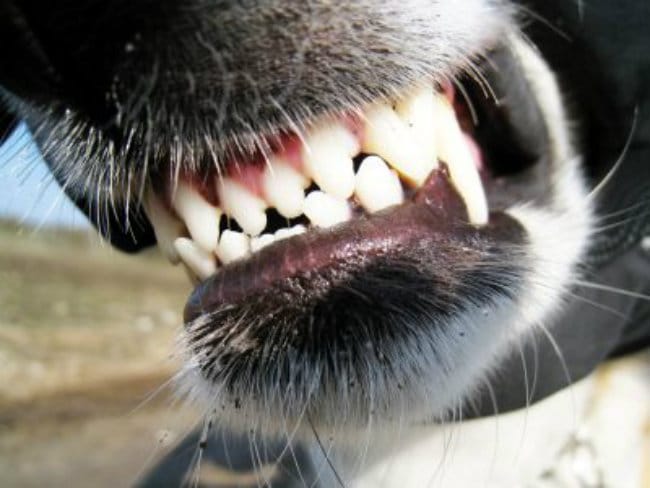 Nearly all dogs will have a total of 42 teeth (although some breeds do have less including Bulldogs, Pugs and Pekinese). The arrangement of the teeth are as follows…

Each set of teeth have different functions for example the incisors that are at the front of the mouth are for cutting and tearing the food. The canines are actually now redundant in modern day dogs as they were previously used for for fighting (when dogs roamed in packs). You can see the canines on both sides of the upper and lower jaw – just behind the incisors. The premolars and molars are used for chewing and grinding up the food.

About Puppy And Adult Dog Teeth

Puppy and adult dog teeth are made up a ‘pulp’ that contains important blood vessels and nerves. So each tooth has a central pulp chamber and canal with dentine making up the majority of the tooth. The crown is the part of the tooth that arises from the jaw which is then covered with a very hard enamel and cement making up the remainder of the tooth surface.

You can quite clearly see in the picture above how the canines (or fangs) were so important in ancient times when dogs roamed in packs (although as previously mentioned they are not as important in domestic dogs). The teeth in-between each ‘fang’ are the lower and upper incisors.

Tartar is a very common problem that can affect young and older adult dog teeth. Tartar is mostly made up of Calcium Phosphate although it can also contain food particles and bacteria. Tartar is normally yellowish/brown or completely brown is color which will slowly build-up on each tooth. During the initial stages of tartar build-up when it is soft it is known as Plaquebut as the build-up starts to harden it is referred to as tartar.

Just like in humans food particles and bacteria can all in-between gaps in the teeth causing bacteria and tartar to build up. A slow build up of tartar can cause tooth decay, bad breath, gum infections, loss of teeth and digestive problems.

Cavities are far less common in dogs and puppies than they are in humans. Tooth cavities will normally start to develop around the gum line and the problem is normally associated with Periodontal disease. It is also important to mention that cavities can also develop in the Crown (of the Molar). This problem can be extremely painful as it is also possible for the cavities to eventually lead to root abscesses (which are unbelievably painful).

The most effective and fastest treatment for puppy and adult dog teeth cavities is for the affected tooth (or teeth) to be removed (extracted). Although it is possible for the cavities to be filled and the tooth saved most vets will go straight for the surgical removal of the tooth. Root canal dentistry can also be performed in some cases but it depends on the extent of the problem (root canal therapy is particularly effective for teeth that have become fractured).

Broken dog teeth are actually very common in dogs mainly because it is common for dogs and puppies to bite or chew on objects (that they really shouldn’t be chewing on). Bones, the wire on kennels and stones are some of the most common culprits for causing teeth to become broken or fractured.

If the tooth or teeth has only been slightly affected i.e. the breakage involves only the enamel then the problem is far less serious (or painful) however if the Crown has become broken with the dental pulp also affected then the problem is extremely painful and more serious. A dog that has suffered from a broken tooth may start to become depressed or even refuse to eat food (which will then cause weight loss). To treat this problem the tooth can either be extracted or root canal therapy along with a new Crown used to replace the damaged tooth can be performed by the vet.

Gingivitis is one of two forms of periodontal disease (the other form is periodontitis). Gingivitis is a treatable gum condition which occurs when the gums become inflamed. The inflammation occurs when bacteria builds-up in-between the gums and the teeth leading to irritation, inflammation and then bleeding. The problem is exacerbated due to a build-up of rough dental calculus (tartar) building up along the gum line – this will then start to force the gums away from the edge of the teeth – causing more spaces and crevices for food and bacteria to fall. More and more tartar will build-up leading to further inflammation and irritation.

Tartar is the primary cause of Gingivitis. This problem will often occur in dogs over the age of two years of age and some breeds are more prone to the problem including Poodles and smaller breeds. It is always a good idea to feed dogs that are predisposed to the problem dry dog food including dry kibble – bones and chews can also help to reduce the build up of tartar.

One of the most common symptoms of Gingivitis is bad breath, red gums, swollen gums – they may also bleed and pus can ooze from the gum line when they are pressed.

Treatment for Gingivitis should involve the teeth being professionally cleaned, scaled with each tooth professionally polished to remove any plaque and tartar. Vets are actually starting to use ultrasonic cleaning kits that are used on humans as they remove more tartar and plaque and get better results.

Periodontitis can be a very painful and debilitating condition and develops from Gingivitis. We have previously discussed the basic structure of puppy and adult dog teeth and one of the main ‘ingredients’ to keep each tooth in place is a substance called Cementum (alongside some connective tissue called periodontal membrane). However, with Periodontitis the gum is slowly infected which will then also start to attack the roots leading to the teeth becoming loose and then sometimes becoming detached and even falling out.

Although a dog that has become affected by Periodontitis can still eat and even have a reasonable appetite, the whole process is very painful. If the roots become so badly affected that an abscess develops this can lead to the abscess bursting causing nasty discharge to ooze from the nasal area.

Root abscesses can affect any of your dog or puppy’s teeth but the most common teeth to be affected are the upper fourth premolars and canines. Of course if you have ever been affected by a root or tooth abscess then you will have a good understanding of how painful this condition is. Alongside the obvious pain that an abscess can cause your dog may also experience a fever, depression and loss of appetite. The affected tooth may even ooze discharge.

It is also not uncommon for the area around the abscess to start to swell (just below the eye). After a period of time the abscess will burst and break through the skin causing discharge and pus to drain and cover the skin and fur all over the face. An X-ray will help to determine if an abscess has affected the tooth and bone and treatment may involve the removal of the affected tooth and the cavity cleaned and drained.

To help avoid puppy and adult dog teeth problems you should brush them on a regular basis and get them checked over by your vet if you have any concerns whatsoever.

If you found this guide to adult dog teeth useful then why not take a look at our page on puppy teeth useful.

1. A complete guide to puppy teeth: Discover all there is to know about puppy teeth and teething.

2. How to brush you dog’s teeth: Discover everything about adult dog and puppy teeth care and how you can keep their teeth clean.