Why is my dog vomiting bile? The causes, symptoms & treatment 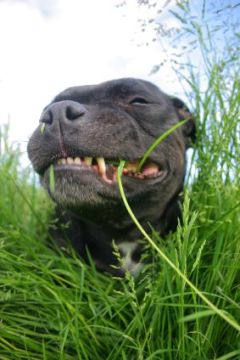 Why is My Dog Vomiting Bile…?

A complete guide to the causes, symptoms and treatment for bilious vomiting in dogs…

Firstly if your dog starts vomiting bile you should take him straight to the vet for a full medical examination (just to make sure everything is ok). Having said this it is relatively common for dogs to throw up yellow bile…but what is this liquid and what function does it actually perform?

We all know that the liver performs a variety of critical functions in your dog or puppy, and the production of bile and bile salts is just one of these vital functions.

The digestive process starts as soon as your dog or puppy has eaten. After the food has been swallowed it will pass down a long muscular tube which passes directly from the dog’s pharynx, through the dog’s chest and then down into the stomach. This tube known as the oesophagus has the very important function of transporting food into the dog’s stomach.

The stomach (which works like a food mixer) is actually a muscular sac that stores and mixes up the food. The lining of the stomach will then produce acid and enzymes to help with the digestion of the recently eaten food. The food will then pass through the pylorus into the dog’s small intestine. The small intestine will continue breaking up the food into much smaller and more manageable components (which can be absorbed by the intestinal wall).

At this point the bile that has been manufactured by the liver and then stored in the dog’s gallbladder is released into the small intestine. The pancreas also produces enzymes which are then secreted (alongside the bile salts) then passed through the small ducts found in the intestine so that the food and it’s contents can be effectively broken up and utilised by the dog’s body.

So why is my dog vomiting bile…? The reasons why dogs vomit bile is not always clearly understood. However, we have listed some of the usual suspects that can lead to this problem…

1. Sometimes dogs will vomit bile when they have an empty stomach, are hungry and have not eaten recently.

2. Although all breeds can be affected and it can be seen in dogs at any age, it is a problem that seems to be more prominant in older dogs.

3. A dog suffering from gastritis or experiencing inflammation of the intestine can experience this condition.

4. If there is an over-production of bile this can also lead to bilious vomiting.

5. There is an interesting difference to how bile is produced in humans and dogs. Humans will actually produce bile after they have eaten a meal. However, dogs will actually produce bile before they eat. This happens when they anticipate that they are about to get fed, for example we have a dog called Gertie that knows to the minute when she is going to be fed, 18:00 PM exactly. Any later and she starts to really let us know she wants some food! So it is possible that Gertie (like other dogs) will start to produce bile ready for her meal.

The problem develops (i.e. the bilious vomiting) when the food is not provided after this bile has been produced so the dog will need to get rid of any bile to stop it from burning the stomach and causing more problems (so it is vomited to avoid this problem). Luckily we always feed Gertie at the same time (18.00 PM) so we reduce the possibility of this happening.

5. Some foods can also lead to your dog vomiting bile especially foods that your dog is not used to or if you have changed your dog’s diet recently.

6. Another possible reason for a puppy or dog to start vomiting bile can be through irritable bowel syndrome. This is because it causes problems with gastric mobility. 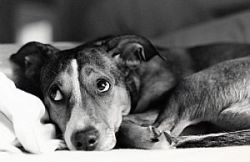 How can I stop my dog from vomiting bile…? As previously mentioned you should always take your dog or puppy to the vet if you have any concerns mainly because it could be the symptoms of a more serious illness or condition. Assuming that you have spoken to your vet and more serious conditions have been ruled out, the treatment will normally consist of some of the following…

1. The vet may prescribe medication to alleviate some of the bile and acid build-up (Pepcid is a common medication for this problem).

2. As previously mentioned dogs that are hungry or have not been fed for long periods (i.e. in the morning and evening) can lead to bile accumulating (and then vomited). Therefore it may be recommended by the vet that the food is spread out throughout the day and fed in smaller portions.

3. Try to avoid suddenly changing your dog’s diet. Always get medical advice first as the vet may be able to look at your dog’s medical history to see if there any possible previous health problems that may be exacerbated by a change in diet.

4. Avoid feeding your dog food that can soak up moisture and expand in your dog’s stomach, dry kibble can be a cause of this.

5. Check that your dog does not have any food allergies as this can lead to your dog vomiting bile.