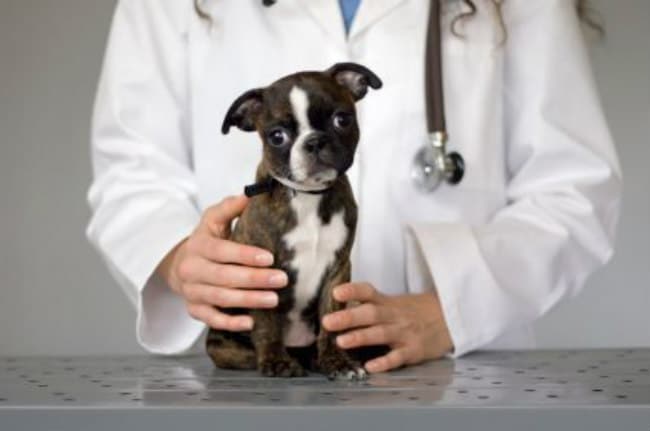 Canine bad breath is actually a preventable problem often caused by periodontal disease (the two most common forms are Gingivitis and Periodontitis). When we say doggie breath is a preventable problem we simply mean by brushing your dog’s teeth on a regular basis you will reduce the chances of dental plaque and tartar from building up. It is estimated that 7 out of 10 dogs have Gingivitis and 85% of dogs over the age of four experience Periodontal disease (so it is a pretty common condition)!

So what causes bad breath in dogs…? Basically this condition is caused by a build up of tartar on the teeth. This provides the perfect environment for nasty bacteria to accumulate. The bacteria then produces stinky by-products that make the dog’s breath smell.

Gingivitis is a condition that develops as a consequence of bacteria building up between the teeth and gums. This bacteria eventually leads to the gums becoming irritated and inflamed which will then lead to bleeding. In both humans and in dogs the gums are designed to be nice and snug around the teeth, however when a dog starts to experience Gingivitis a rough tartar starts to build-up leading to gaps developing between the teeth and gums. These gaps are perfect for trapping food which then leads to nasty bacteria accumulating, which then leads to infected gums and bad doggie breath.

Tartar (which is also known as Calculus) is comprised of a variety of substances including organic material, food particles, calcium salts and bacteria. When the tartar initially accumulates on the teeth it is a yellow-brown color and is fairly soft to the touch (when it is initially deposited). During this stage it is referred to a dental plaque but as it develops and becomes harder it becomes tartar. The most common place for tartar to build-up is on the upper premolars and on the molars.

Gingivitis is a common cause of canine bad breath. If you are unsure take a close look at the gums as they will appear inflamed and will bleed easily when touched. A build-up of tartar is more common in dogs that eat moist dog foods as kibble and dry food has an abrasive effect on the teeth which can help to eliminate some of the plaque and tartar.

Treatment For Gingivitis In Dogs

The treatment for Gingivitis will involve your dog’s teeth needing to be professionally cleaned, scaled and then polished. The vet’s aim is to remove the plaque and tartar and for your dog to have his teeth cleaned properly he will need to be anesthetized. Once they have been professionally cleaned it is a good idea to continue brushing your dog’s teeth regularly (at least three times a week) to stop Gingivitis from developing.

Periodontal disease is another common cause of canine bad breath and is the next stage on from Gingivitis. The tooth is fixed in position by a substance called Cementum and a connective tissue known as the Periodontal membrane. As the infection starts to not only affect the gums it spreads to the Cementum, the Periodontal membrane and the actual root. As the infection takes hold the tooth will start to loosen leading to the tooth becoming detached and then falling out.

This is a very painful process and can lead to other secondary problems including a root abscess. If the abscess bursts it can cause a nasal discharge or an oral-nasal fistula. It can also lead to a swollen area below the eye and goes to show how a simple case of bad breath can lead to a fairly serious and painful health problem.

Treatment For Periodontal Disease In Dogs

The treatment for Periodontal disease will also involve the teeth being professionally cleaned. However, if the disease is particularly advanced then some of the diseased gum (and even some of the teeth) may need to be removed. After the gums have healed the vet may prescribe a course of antibiotics (up to three weeks). The vet will probably advise the owner to continue the treatment at home (this will normally involve an antiseptic substance such as Peridex being squirted over the affected area). The Peridex solution (brand name) contains 0.2 percent Clorhexidine and can be soaked on to a cotton wool bud and then placed over the affected area.

Another great product for eliminating canine bad breath and to aid in promoting oral hygiene is a product called Stomadhex. This product is amazing as it sticks to the inside of the dog’s mouth (on the mucous membranes) and gradually releases a mixture of Clorhexidine and a vitamin called Nicotinamide. Not only does this help eliminate bad breath in your canine it also helps to prevent plaque and tartar from accumulating.

It’s also worth mentioning that canine bad breath can also be a sign of more serious health conditions including tumors.