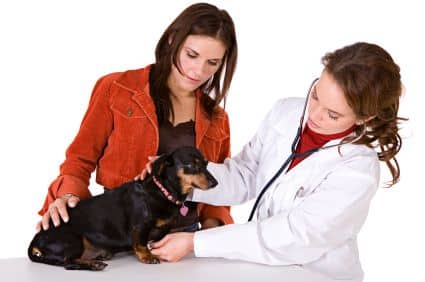 Rabies in dogs is a very serious and deadly condition…

To help protect your dog against the disease it is very important that your dog has a vaccination schedule.

Due to the seriousness of this disease in it’s advanced stages you and your family may need to weigh up the pros and cons of euthanasia…as this may be the kindest option for your beloved pet.

Rabies is more often found in animals that live in the wild rather than domesticated dogs, cats or other animals.  However, this doesn’t mean that your beloved dog can’t catch it should he be unlucky enough to be bitten by an infected animal…

The Cause of Rabies in Dogs…

Signs & Symptoms of Rabies in Dogs…

Although rabies can be prevented it can’t be treated or cured – so if your dog is infected with the disease – unfortunately he will die. Below we have listed the stages that your dog will through after being infected with the virus.
Prodromal Stage

As previously mentioned there is no cure or treatment for the disease. However, rabies in dogs can be prevented with a vaccination schedule and shots. This involves your dog being injected with a small amount of the disease which will then trigger your dog’s antibodies to start fighting the virus if your dog is unlucky enough to be infected in the future.