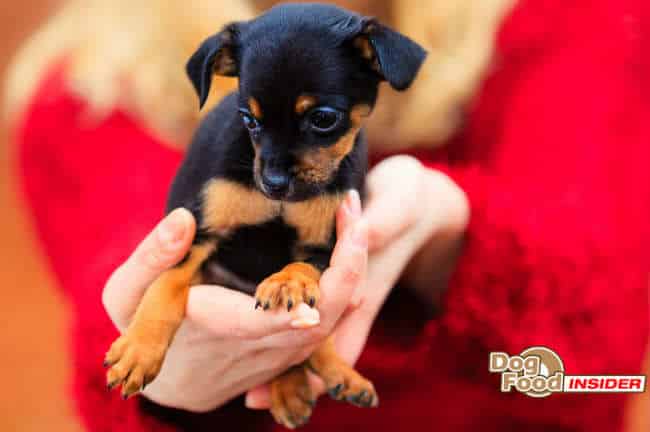 The canine heat cycle refers to the period when the female or bitch is in season i.e. a period when she is ready to mate or breed. The cycle is more technically known as the estrus.

The heat cycle normally occurs from the age of 6 – 12 months although larger breeds dogs can be in season at an older age, sometimes when they are 12 – 24 months old. The heat cycle will normally last for about 3 weeks or 21 days.

Although this lasts about 3 weeks they are only capable of breeding or getting pregnant for about 3 – 21 days in the entire 3 week period. An interesting fact is that dogs will carry on having periods for their entire lives, which is of course different for humans who stop having periods at a certain age.

Symptoms of Pregnancy in Dogs…

Your beloved little dog is now an adult and will start to lick and pay more attention to her vulvar. Your dog’s vagina may also be swollen.

It is very common for your dog to bleed from her vagina, the flow of bleeding maybe heavy or slow, but the amount of bleeding will decrease as the month goes on. At the beginning of the cycle the blood will often be a dark red color but as the season progresses it will become more of a salmon color.

Although the vagina will appear swollen at the beginning it will begin to become softer later in the month, this is due to the progesterone levels rising which prepares her ovaries for the release of her eggs. You may see your dog start to curl her up tail on either the right or left side and she may even urinate more often as she wants to spread her scent to the males.

Stages During the Canine Heat Cycle

Stage 1 – The first stage is known as the proestrus stage where your dog will urinate more, have swelling around the vulvur. This is the period where the male will want to mate. This stage will last about 9 days and is when the pituitary gland starts to produce the hormones that help to encourage reproduction. The two main hormones that help to achieve this are the Follicle Stimulating Hormone (FSH) and the Luteinizing Hormone (LH).

The FSH is very important as it helps to increase the size of the follicles which enable the ovum to develop. This is what causes the vulva to start to swell (leading to the bloody discharge). You need to keep a close eye on your dog as during this stage some dogs are very keen on cleaning the area around the vulva (so the bloody discharge maybe cleaned up before you notice).

Stage 2 – The second stage is known as the estrus. This is the stage where your dog will allow a male to mate with her, this can happen from anywhere from 3 – 21 days.

Stage 3 – The third stage of the cycle is known as diestrus where she is beginning to come out of season. At this point she will not be so keen to mate. This stage can also last for different amounts of time varying from 4 – 14 days.

The next canine heat cycle will start from about seven months from the last time she was in season.

False Pregnancy – The cause of a false pregnancy is due to a misunderstanding in the hormonal changes. An increase in prolactin and decreases in progesterone are a common cause of false pregnancies.

Canine Pregnancy Calender: If you want to be accurate when using a pregnancy calendar for you pooch, you need to know when your dog mated.

There are actually no infallible methods to confirm a pregnancy in your dog during the first three weeks (21 days). Some of the changes that you may notice can include the following.

1. It is very common to see behavioral changes in your dog during the early stages of the pregnancy. A dog in the early pregnancy may appear withdrawn  from her owners or from her normal routine.

2. Your dog may also show some physical changes – this maybe in the way she carries herself when she walks, she maybe depressed and she may have an increased desire for food.

3. It is not unusual for some pregnant females to exhibit Coprophagia (this is when a dog eats their poop). In some rare cases a pregnant dog may even eat other dog’s poop. “This is often caused by unclean living conditions, a dietary insufficiency, a mineral or vitamin deficiency or a combination of all of these factors”. (Harris, 1993).

With thanks to Geoffrey Llewellyn’s Book ‘Homeopathic Remedies for Dogs’ we have listed a collection of great remedies for variety of pregnancy related problems.

Below are some great remedies for problems associated with Whelping:

2. Caulophylllum 30c – give this once a fortnight during the pregnancy.

3. Causticum 30c – this is a great homeopathic remedy for uterine inertia – this is when the uterus becomes tired and contractions cease. Give this remedy once every half hour until the contractions start again,