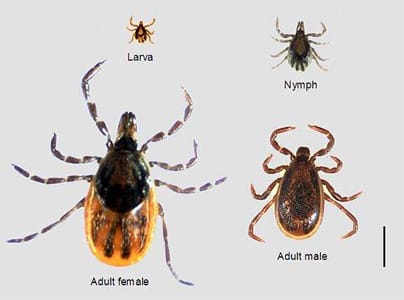 When our readers ask us to describe what ticks look like, instead of a description, we like to show them pictures. Looking at pictures is the only way that you can truly see how horribly ugly ticks are! 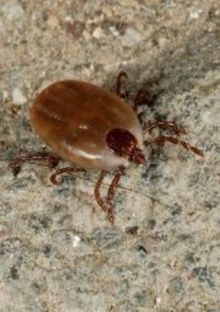 The Tick photographed above has already fed (you can see this because it looks nice and plump, and yes you guessed it, that nice fat bulge is full of blood)!

There are actually many different types of ticks, but to give you a pretty good idea, we have listed the most common types that pet owners tend to come across including the Brown, Lone Star, Wood, Seed, American and the Black Legged Tick (Deer Tick). 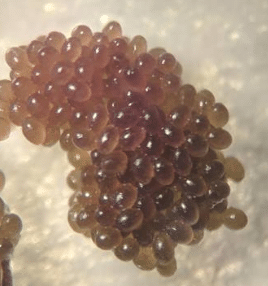 In the picture/photo on the right, you can see a collection of Deer Tick eggs. This is the earliest stage in the Tick life cycle.

The Deer Tick came to the public’s attention in the 1970’s when scientists realized that this variety was one of the primary carriers of Lyme Disease – one of the most common Vector-borne diseases.

Lyme disease has grown rapidly in the intervening years with over fourteen thousand cases reported annually in the United States.

The Deer Tick will go through four life stages. This variety will grow to the size of a sesame seed with the male slightly smaller than the female. The Deer Tick is also commonly referred to as the Black Legged Tick due to the color of its legs.

They will live for about two years and will start as eggs, before becoming Larvae, Nymphs and then finally a fully grown adult.

The Deer tick will feed on a host three times during its life cycle which consists of four stages. Feeding will start when the Larvae molts into a Nymph, they will feed again when they molt into an adult and again when they need to lay eggs.

It is important to mention that during each feed, they are capable of contracting the bacteria that causes Lyme Disease. However, they can only pass the disease onto another host during the final, second or third feed.

The Deer Tick will normally need to be engorged in a host for at least twenty four to forty eight hours for the Lyme Disease virus to be transmitted or passed on.

It is at this stage that the Larvae will get infected with the bacterium that causes Lyme Disease – known as Spirochete. It is important to mention that that Tick eggs and Larvae are not born with an infected disease, but they catch it as they feed from infected hosts and the disease will continue to be spread as the Tick continues to feed on separate hosts. 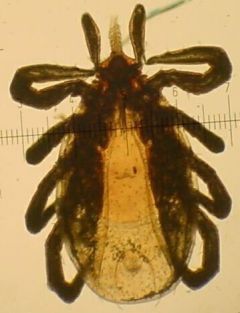 The Deer Tick Nymph will start its life as as a Larvae before falling off its host and molting into a Nymph.

They will not feed for during Winter or the beginning of Spring. They will molt into a Nymph until the Fall (Autumn) period. The Nymph will then need to start seeking a new host and will hide in vegetation until a new host becomes available.

The Nymph will then attach itself to a new host and will feed non-stop for four to five days. During this period, the Tick will significantly grow in size.

The Nymph can now become infected by the bacterium (Spirochete) causing Lyme Disease. In some parts of the country, it is thought that as many as twenty five percent of Ticks carry Lyme Disease.

The Nymph actually prefers to choose smaller host animals, such as small birds and mammals. However, sometimes they may come into contact with other pets (including dogs) and even humans. 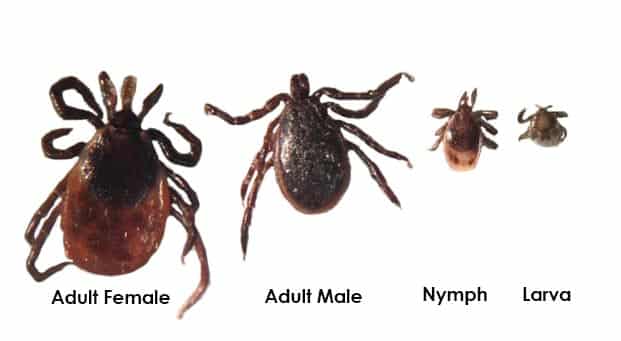 The adult stage is the final stage in the life cycle.

The Adult Deer Tick will normally live in undergrowth and wooded areas. They may also climb up blades of grass to reach a height where they can attach themselves to a new host.

Their most active period is October into November. If the Ticks are not able to find a host in the Winter, they will then hide beneath leaves on the ground and will become inactive in temperatures that drop below 45 degrees Fahrenheit.

Once temperatures rise, Ticks will then start seeking another host and mate so that they can produce offspring in the form of eggs.

The female will lay about three thousand eggs with the female dying soon after. The eggs will then hatch and the two year life cycle will start all over again. 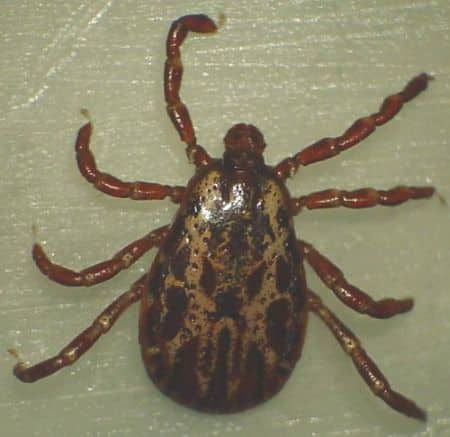 This variety will go through the same life cycle including Egg, Larvae, Nymph and the Adult.

During the later stages (Larvae, Nymph and then Adult) the Tick must have a blood meal before they develop into the next stage. This variety will feed on humans if they come into contact with them, however, they are more likely to feed on Dogs, Raccoons, Squirrels and Chipmunks. This variety will not carry Lyme Disease. 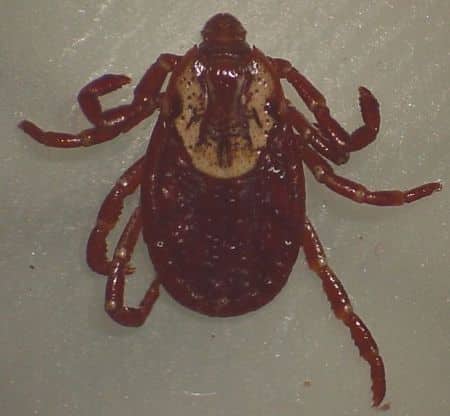 The Brown Dog Tick or Rhipicephalussanguineus Latreille is unique among the different types because it can complete all three life cycle stages indoors. For this reason, it can be found all over the world, mainly due to the fact that it doesn’t have to cope with very low temperatures.

They will feed on all animals but due to the fact that they are largely found indoors, dogs are the most common host for the Brown Dog Tick.

The female Brown Tick will lay about five thousand eggs with the lifecycle consisting of Eggs, Larvae, Nymph and then Adult.

The Larvae will hatch from the eggs about two weeks or fifteen days after they have been laid by the female. The Larvae will then seek a host and feed for up to one week before it molts into a Nymph.

The Nymph will then feed from five to ten days, until they molt into an adult. It is possible for the Brown Dog Tick to complete its entire life cycle within two months. 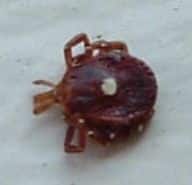 The Lone Star (scientific name of Amblyomma americanum) is easily recognized due to the white ‘Star’ like mark that appears at the center of the Tick’s back.

People who are bitten by this type of Tick will sometimes develop a red bumpy rash – sometimes called the ‘Bullseye Rash’.

Symptoms that may accompany the rash include lethargy, fatigue and muscle aches – often the first signs of Lyme Disease – which can also affect dogs and puppies.

Other diseases that can occur as a result of a bite can include – Human Monocytic Ehrlichiosis, Rock Mountain Spotted Fever, Swollen Lymph Nodes and Tularemia.

This variety will also go through the normal Tick life cycle. The Lone Star is one of the most aggressive Ticks and will travel long distances to find a host. They can also feed on a host during each stage of the life cycle.

In the last thirty years, the Lone Star has significantly increased in numbers.