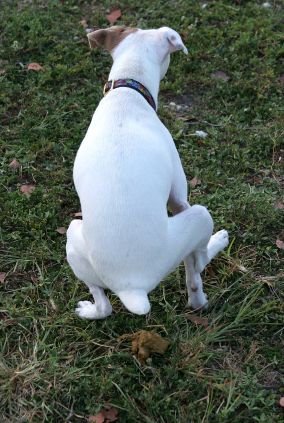 Canine Irritable Bowel Syndrome (IBS) is an unpleasant condition that can lead to a number of symptoms (more on this below). It is important to mention that IBS is different to Inflammatory Bowel Disease which is an autoimmune disease – which basically means that your dog’s immune system starts to attack your beloved pooches own organs.

Symptoms of IBS – IBS will lead to your dog’s stomach and possible intestine becoming inflamed. However, some experts think that the illness is not actually an inflammation of the intestines but rather how the intestines move the food through a dog’s body.

IBS is actually very common in dogs and most of our canine friends will develop the condition at some point in their life. The symptoms of IBS can include…

1. Vomiting is a fairly common symptom.
2. Diarrhea can occur. If your dog is vomiting and experiencing diarrhea then you really need to get your pooch to the vet. A consistent loss of fluids can be very dangerous.
3. Your dog’s poop may have a jelly like appearance and you may even notice spots of blood in it – this is due to the difficulty your dog may experience when straining to defecate.
4. If your dog’s colon has become affected this may lead to problems including constipation.
5. In some cases you may also notice some mucus in your dog’s poop.
6. Your dog may also develop a fever – this is another symptom of IBS.
7. Weight loss (extreme) can be a result of the condition.
8. Your dog may start to show signs of bloating (if you have any concerns that you dog has bloat then take your pooch to the vet immediately.
9. You may notice behavioral changes in your dog such as depression.
10. Your pooch may also lose it’s appetite and in some cases have stomach cramps.

It is considered by experts to be one of the most common gastrointestinal problems to affect dogs and will need medical treatment. It is important to mention that Irritable Syndrome is different to Irritable Bowel Disease (IBD) mainly because the latter i.e. IBD can lead to more complicated symptoms such as Ulcerative Colitis.

Causes of IBS – The cause of IBS is actually not really understood – however it is thought to be caused (or triggered by a number of different factors) including…your dog’s diet (some experts think that some proteins in specific foods can lead to problems in the gastrointestinal tract.

Other causes of the condition are thought to be due to genetics (inherited through genes passed down), infections (bacterial) and even unknown abnormalities affecting your dog’s immune system. Some experts also think that IBS can be caused by stress and even anxiety.

Diagnosis of IBS in dogs – The diagnosis of canine irritable syndrome will involve the usual full physical examination – your vet will also look at your dogs medical history as it might be recurring problem. Your vet will also need to rule out any other cause that might have similar symptoms.

One method used by vets to diagnose IBS is for a biopsy to be taken of your dog’s intestinal wall – however more simple tests can be done prior to this rather intrusive intervention.

Sometimes tests are completed to determine whether or not your dog only has IBS as opposed to something more serious affecting the intestine, liver and/or pancreas.

As previously mentioned your vet will also want to rule out any other problems that may have caused the symptoms that your dog is displaying – one of the best ways to do this is often through an old fashioned stool sample. By examining your dog’s stool the vet will be able to spot any other culprit such as worms or other parasites.

In some cases the vet may ask for an X-ray to be undertaken this may show excess gas or a thickening of the Intestines.

IBS – Prevention and Treatment – One of the best ways to treat and even prevent your dog from getting IBS is to make sure you are feeding him the best diet. Below is a list of some of the best ingredients (high in fiber and low in fat).

If your vet has recommended a change of diet and this has not worked then prescription medication maybe used including prescribing Antispasmodic meds. This will help to stop the stomach and intestines from continually contracting. Having said this – a vet will not always choose to use medication to treat the condition as it can have a bad effect on your dog’s digestive tract.

As previously mentioned Canine Irritable Bowel Syndrome is very different from Canine Inflammatory Bowel Disease. IBD is caused when the immune system starts to attack a dog’s own organs (the digestive organs). This will cause the bowel to become thicker which will then cause problems with contraction making it more difficult for it to maneuver food.

In short, with IBD the inflammatory cells (including Plasmacytes and Lymphocytes), start to attack the the digestive organs. These cells will start to build and cause problems in the large intestine, small intestine and stomach leading to a variety of symptoms.

What is Inflammatory Bowel Disease?

According to Eldredge at al (2007) any problems associated with the small and large bowels will cause three main symptoms including diarrhea, constipation and the passing of blood in the stools. Inflammatory Bowel Disease is also characterized by large numbers of lymphocytes forming in the intestinal tract and stomach.

Each of these health issues that fall under the heading ‘Inflammatory Bowel Disease’ have a variety of symptoms including diarrhea (sometimes chronic in nature), anemia, malnutrition, weight loss and malabsorption. Although each of these conditions are treatable they are very difficult to cure.

The reason why each of these health problems fall under the heading ‘Inflammatory Bowel Disease’ is because each of the health issues will have  different types of ‘inflammatory cells in the lining of the small or large intestines’ (Eldredge et al, 2007).

Lymphocytic-Plasmacytic Enterocolitis is one of the most common forms of Inflammatory Bowel Disease and is sometimes caused by food allergies, intestinal bacteria and giardiasis.

There are other forms of Inflammatory Bowel Disease including:

Eosinophilic Enterocolitis – this is another fairly rare form of Inflammatory Bowel Disease and can be found in the stomach, small intestine or colon.

Thornton, K and Eldredge, D. 2005. The Everything Dog Health Book.