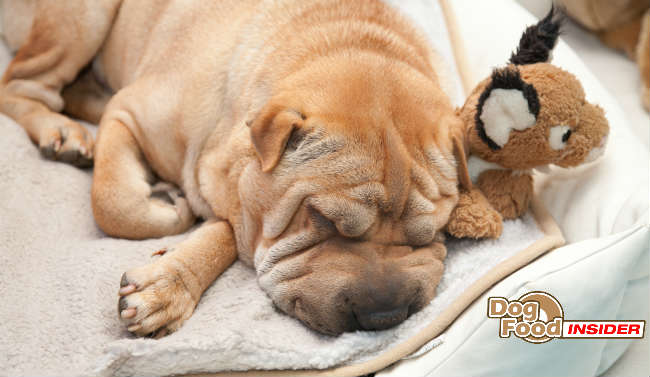 Folliculitis is often seen in breeds like Boxers, Dobermans, Miniature Schnauzers and Pointers, basically breeds that have short hair. The skin condition is characterised by multiple small pustules that can develop on the affected dog’s muzzle, groin, abdomen and under the armpits. This condition often develops as a secondary problem alongside another already present skin disease such as Scabies or canine Seborrhea.

This condition normally starts to develop in the dog’s hair follicles. A characteristic sign of the condition is for the small pustules to develop with the hair sticking out of the middle of each raised pustule. If the follicles become infected this can cause more serious symptoms leading to the skin developing scales around the follicles – as the pustules become larger they can burst and become crusty or start to discharge pus.

The treatment for mild cases of Folliculitis will normally start with the affected area being washed and cleansed but in more serious cases the dog maybe prescribed a course of antibiotics. The vet may also recommend that the affected dog is bathed in a Povidone-iodine shampoo for a specified length of time.

This condition which is also seen in humans often starts when an injury has become infected. The injury or trauma can be caused by a number of factors i.e. a scratch, bite or cut. This condition can often be stopped in its tracks by treating the initial injury by taking the dog to the vet.

A dog that is experiencing Cellulitis may have enlarged Lymph nodes and the affected area may appear hot, tender and red. To treat this condition the vet may prescribe antibiotics after the affected area has been thoroughly washed and cleaned.

This condition is often seen in specific breeds including Spaniels and Shelties and is actually relatively common. The symptoms of Impetigo (Superficial canine Pyoderma) will start with the dog developing ‘rings’ that start to appear on the stomach and back (the hair may also start to fall out on the ringed areas and the affected area may become inflamed and even crusty). Although the condition will often reoccur the treatment will consist of the dog been treated with medicated shampoo and antibiotics.

This bacterial infection not surprisingly occurs in-between the skin folds where the air is unable to properly circulate causing bacteria to accumulate. Common breeds to be affected are Cocker Spaniels, Springer Spaniels (especially in the lip folds). Other breeds to be affected through lip fold pyoderma include St Bernards and Setters. Face fold canine pyoderma can affect brachycephalic breeds and Pekingese and Shar Peis. Tail fold canine pyoderma can also occur in dogs with ‘screw’ tails including Boston Terriers and English Bulldogs. It is also important to mention that female dogs that are overweight can develop a condition known as Vulva fold pyoderma.

Treatment for this condition will normally involve the vet recommending that the affected areas are kept as dry as possible. In severe cases surgery may need to be performed by removing the skin fold through corrective surgery. If the area is inflamed then antibiotics maybe prescribed. Another common treatment is through cleaning the affected area and then a Benzoyl Peroxide shampoo used to wash the affected area.

Juvenile Pyoderma (which is also known as puppy strangles)

This often affects puppies below the age of four months of age (normally between the age of four and sixteen weeks). The cause of the condition is unknown and can affect all of the puppies in the litter. The symptoms will include inflammation of the face, ear flaps, eye lids and lips. The skin may also develop ulcers, pustules and even appear crusty. It is not unknown for the Lymph nodes to become swollen. Antibiotics alongside a course of Corticosteroids is normally the most conventional treatment.

Deep Pyoderma can come in numerous forms and is normally difficult to cure as it can become chronic. Treatment will consist of antibiotics and the affected dog being bathed in antibacterial shampoo. If the condition is serious the skin can even become scarred.

Interdigital pyoderma is often seen in larger breeds like the Bull Mastiff and involves the area between the toes becoming inflamed and even discharging pus. The causes of this condition can be due to injury, trauma, ticks, parasites, thorns, irritants and foreign bodies. The treatment will involve the vet removing the cause i.e. the foreign body and then prescribing a long course of antibiotics. The feet may also need to be soaked in a medicated shampoo.

Hot Spots is a skin condition that causes an area of about one up to four inches becoming inflamed. The condition gets worst due to the dog constantly licking the affected area causing round patches. Hot spots can develop on any part of the dog’s body but commonly develops under the ear flaps – so is often seen in dogs with floppy ears like New Foundlands and Golden Retrievers. Causes of the condition can be due to mites, fleas and other parasites – a lack of grooming can also cause the condition.

It is important to mention that Hot Spots do cause dogs lots of pain and discomfort so before treatment the dog will need to be sedated. Betadine will normally be used to clean the affected clipped area. An antibiotic cream and oral antibiotics may also be prescribed. If the dog is itching frantically then the vet may prescribe a course if Corticosteroids.

Dry pyoderma is another skin condition that affects young puppies around the age of four to nine months of age causing scales to develop and adhere to the face and other extremities. Doberman Pinschers are one of the most commonly affected breeds.