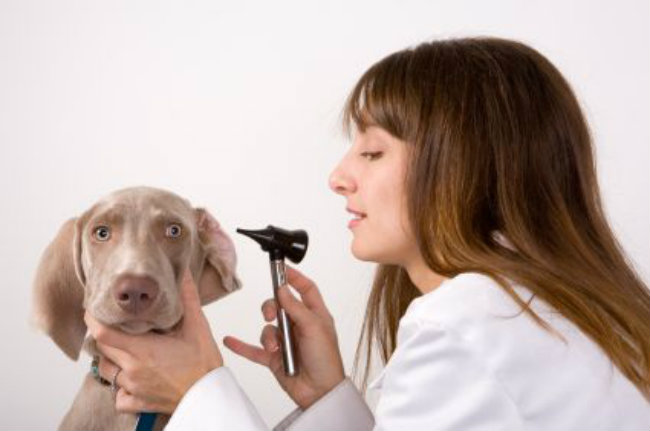 For your beloved dog ear problems can come in a variety of forms including ear infections, allergies, mites, tumors, skin diseases (the list goes on) with each of these health problems causing a variety of different symptoms (and in the worst case scenario deafness).

Before we go into detail regarding the most common puppy and dog ear problems lets first describe what this very important organ does.

The ear and its many functions

Along with your dog’s sense of smell and sight, hearing is one of their strongest senses. Although puppies are actually born deaf as they begin to be able to hear by the age of three weeks their hearing is far stronger than a humans. For example dogs are able to pick up and detect very faint sounds that we are unable to detect or even notice and also detect sound frequencies far out of reach for the human ear.

It is also worth mentioning that a dog will rely far greater on their hearing than they do on their eyesight – which might sound surprising (but it at least explains how strong this sense is)!

As you undoubtedly know human ears come in all shapes and sizes and it is the same for your pooch (some stick up and some flop to the side). You might not realise however that your beloved little best friend also has hair on the inside (as well as the outside). In fact some breeds like the Poodle and Cocker Spaniel have far more hair than other breeds.

How exactly does a dog hear?

Sound (which is a vibration) is picked up and collected by your pooches Pinna or ear flap (this is the part of the ear that you can see – the outer ear). After the sound has been collected it will then pass down the large vertical and horizontal ear canal (before the horizontal canal reaches the ear drum). It is worth mentioning that new born puppies are not born with an open ear canal and it won’t open until they are one to two weeks old.

Any movement in the ear drum (also known as the tympanic membrane) is then transmitted through a chain of small bones (also known as the auditory ossicles) until it reaches the bony canals of the inner ear. Within this area the cochlea is found which works as the ‘receptor’ for your puppy or dog’s hearing. Inside this area is a fluid that will convert the sound vibrations that the ear collects into fluid waves.

These waves are then turned into nerve impulses which are then conducted by the previously mentioned cochlea nerve and finally reach the auditory nerve. After the cochlea has transformed the sound vibrations into messages they will pass along the auditory nerve until they reach the brain.

Ear Pinna Disease The pinna as previously mentioned the large flap (essentially it is the outside of the ear, pink on the inside and hairy on the outside). The ear pinna is not surprisingly more prone to injury and damage than other parts of the ear (mainly due to it’s size and the fact that it has a large blood supply). As a consequence of head shaking (or other injury) it is not uncommon for wounds to bleed excessively due to the large anount of blood vessels.

It is not uncommon for the ear pinna to be one of the worst areas affected by scabies and lice.

Bilateral hair loss This is one of those puppy and dog ear problems that is not serious (in fact other than being a little unsightly it won’t cause any problems to your pooch other than the ears losing hair and the skin becoming leathery and pigmented). Bilateral hair loss is more common in certain breeds including Dachshunds and Poodles.

Otitis Externa (External Otitis – ear infection). This is in simple terms an infection of the ear canal. This is one of the most common puppy and dog ear problems in breeds with floppy ears (the reason for this is due to a lack of ventilation). For example some of the breeds that can develop this problem include Golden Retrievers, Old English Sheepdogs, Cocker Spaniels and many more). Breeds with ears that stick up vertically rarely get this problem as air is able to circulate freely. Another cause of external otitis is where air is not able to circulate due to excessive hair inside the ears (a problem with Poodles).

Other factors that can cause this problem can include ear mites , atopy (an allergy), dermatitis and food hypersensitivity. Another cause of this ear infection is due to primary and secondary seborrhea (where a common symptom is a build up of wax which just happens to be perfect for bacterial growth and therefore ear infections).

Treatment for this condition will normally involve the vet cleaning the inside of the ear thoroughly (ear drops might be administered). In really bad cases it might be necessary for the ears to be syringed (your dog will need to be anesthetized). After the ears have been cleaned thoroughly anti-biotics and anti-inflammatory drugs will probably be prescribed to get rid of any infection.

Tumors This is one of the most serious puppy and dog ear problems but is actually fairly rare. This is where a tumor will normally develop inside the ear canal (leading to a blockage). Symptoms are very similar to Otitis Externa. Diagnosis of this condition will normally be achieved by a vet examining the ear canal with an auriscope. Treatment will normally involve the vet surgically removing the tumor.

Haematoma This is a collection of blood causing the pinna to swell. It is painless and is a result of the blood vessels being ruptured in the cartilage.

Foreign bodies in the ear

This is one of the rarer types of puppy and dog ear problems – in fact the only exception is grass seeds. If you happen to walk your dog in the summer you may encounter grass seeds. Some breeds (those with floppy ears) are more prone to developing this problem (although the seeds only cause a problem when they start to work their way down the ear canal until they get as far as the ear drum.

To get rid of the seeds the vet will need to be anesthetized so that the vet can use a long set of forceps (guided by an auriscope) to locate the problematic seeds.

Otitis Media (middle ear infection) This is when the cavity of the middle ear and the drum become infected and is normally caused by an infection starting in the outer ear. Another cause of this problem is where bacteria has managed to get inside the middle ear via the auditory tube.

As the middle ear becomes further infected your dog will start to experience more pain. Another symptom of this condition is for the dog to tilt the head down (often on the side that has been affected). Your pooch may also lose some hearing.

This is diagnosed by the vet using an Otiscope (through this the vet will be able to see if the ear drum is inflamed). If the ear drum has become ruptured there might be discharge and some pus leaking (which will need to be drained).

Treatment for ear problems in dogs and puppies

Treatment for this ear infection will depend on what has occurred (for example if the ear drum is inflamed and leaking pus then a syringe and needle will need to be used to drain the discharge). The ear will need to be thoroughly cleaned and then oral anti-biotics will need to be prescribed.

For a dog ear problems can be minor and serious (this is a serious ear infection) and will need you to take your dog to the vet straight away – it occurs when the inner ear has become inflamed and infected. If your dog shows symptoms of Labyrinthitis then it is highly possible there might be an inner ear infection.

Labyrinthitis will cause your dog to lose his balance, posture and coordination – your pooch might walk around in circles or lean to the side that has been affected (where jerky and sudden movements can occur). In some cases a dog might start vomiting.