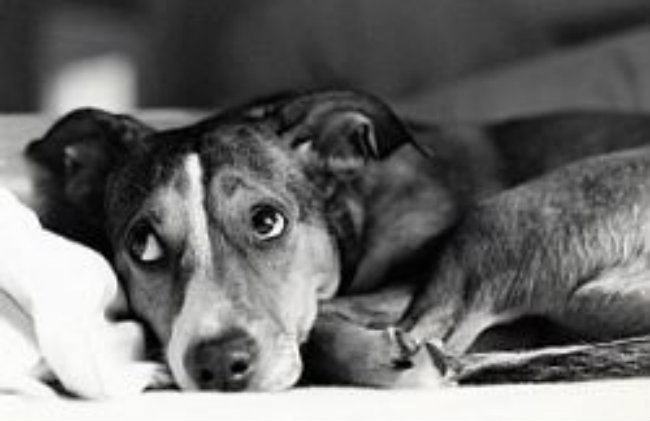 There are many causes of puppy and dog vomiting with some of the causes being due to very serious illnesses. The actual act of vomiting is through the stomach muscles and abdominal wall contracting. Pressure will then start to accumulate in the abdominal area before the dog’s esophagus starts to relax allowing any food or liquid to be vomited through the extended neck out of the mouth.

Of course the dog’s behavior may also change when he or she is either feeling nauseous or is about to be sick including anxiety, a need to be around their owner (for love and reassurance), the dog may also start to salivate or swallow repeatedly before he or she is about to vomit.

Many dogs eat grass which seems to trigger dog vomiting possibly because it irritates the lining of the stomach. However in some cases the vomiting is actually not caused by a health problem but is due to an area in the dog’s brain that is highly susceptible to when a dog is not happy or content and may then feel the need to vomit (motion sickness and travel sickness is a prime example).

Vomiting Due To Scavenging

Dogs and puppies that eat too fast or the wrong types of food (like human scraps etc) are more prone to being sick (and are also at a higher risk of developing bloat). Exercising straight after eating is also a cause of vomiting in dogs and puppies. Sometime puppies that are in a litter will eat and eat almost as if they have to out do their litter mates. If this is a problem then you should feed each puppy individually and in small amounts throughout the day rather than in one sitting.

Vomiting Due To Anxiety In Dogs

Dogs and puppies may vomit when they are anxious or upset – so motion sickness and travel anxiety may cause a dog or puppy to vomit. Common signs of an anxious dog can include drooling, whining and shaking – fireworks and lightening can cause anxiety and subsequent vomiting.

Most Common Illnesses That Cause Puppy And Dog Vomiting

Kidney failure can cause dogs and puppies to start vomiting. Diarrhea and other symptoms are often associated with kidney problems.

Worms including Roundworms, Tapeworms and Hookworms can cause puppy and dog vomiting (among other symptoms).

Diabetes mellitus can lead to sickness and vomiting and also eye problems including cataracts.

Parvovirus is a particularly nasty viral condition that can lead to puppy and dog vomiting (it can also be deadly without urgent treatment).

Addison’s and Cushing’s disease can both lead to nausea and sickness.

There are of course different types of vomiting whether it is persistent or sporadic – each dog may throw up differently and have different ingredients in the vomit i.e. there could be blood, feces or the vomited liquid may be bile like in appearance. The amount, frequency and type of vomit will be important when the vet is attempting to reach a diagnosis so as the owner it may be useful for you to take note of when your pooch is sick i.e. is it happening straight after a meal? Is there blood or feces present in the vomit? Is the dog being sick on a regular basis or does it seem to happen at a particular time of day?

By examining the liquid that has been thrown up (however unpleasant this might be for an owner) it will always be useful for a vet.

Intermittent vomiting can occur now and again but normally over the course of a few days (although it can continue for longer). The cause of this type of ‘sporadic’ vomiting can be due to foreign objects in the stomach, ulcers, tumors, liver disease, kidney problems (and disease), worms, diabetes and stomach problems including gastritis. Other symptoms may include listlessness, reduced appetite and a worried and anxious appearance.

Repeated vomiting where a dog is sick persistently may result in the dog vomiting up a frothy or transparent liquid – this type of vomit is often due to a stomach problem like acute gastritis. It is also important to mention that this type of persistent vomiting can also be caused by severe and potentially life threatening conditions like bloat, pancreatitis, intestinal obstruction and even peritonitis – it can also be caused by a severe bout of enteritis.

What If My Dog Vomits Blood Or Feces?

If your dog is throwing up feces this could be due to the dog having eaten some feces or due to a serious internal problem like peritonitis or due to an intestinal blockage.

Treatment For Puppy And Dog Vomiting

Of course when it comes to treating vomiting in dogs and puppies the vet will need to look and examine the possible primary cause i.e. by treating the disease, illness or condition that is causing the sickness and vomiting. One of the most commom secondary symptoms associated with excessive nausea and vomiting is dehydration.

Most vets will advise that a sick dog or puppy’s stomach is rested through food and drink being withheld for approximately 12 hours. If the vomiting has stopped then the owner can start to introduce water (a useful technique is to let the affected dog lick an ice cube every few hours). If resting the dog’s stomach has worked in stopping the vomiting then the owner could start to give the sick dog some water (half a cup every few hours should be fine).

If after twelve hours the vomiting has completely stopped then the owner can start to introduce very bland and boring food – boiled rice and chicken is always a good mixture which seems to be kind on a dog’s stomach. Owners should only give their dog small amounts every few hours (a couple of tablespoons at a time should be fine). As the dog becomes better then the amount of food and drink can be slowly increased.

It is very important that if your dog or puppy is repeatedly vomiting then the owner should always get veterinary advice. Any signs of blood or feces in the vomit or if the affected dog is experiencing diarrhea alongside the sickness should be investigated by a vet. If the affected dog is showing other signs of illness or is continually sick during the stomach rest period then the vet should also be immediately called.