The Dog Owner's Guide To Giardia in Dogs 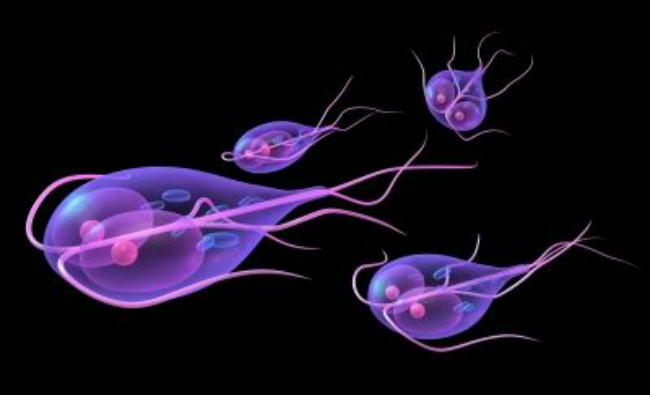 Giardia in dogs and puppies is a contagious disease that is also seen in humans (in fact humans can become infected by drinking contaminate water). Giardia are classified as ‘protozoan’ parasites which are fairly resilient to most environments (for example they can survive for long periods in streams, ponds and lakes and any wet environment that has the right conditions).

There are actually to forms of ‘Giardia’ including a motile form and a cyst form. The motile form is known as a ‘Trophozoite’ (the term ‘motile’ simply means that it has the ability to move or be mobile). The Trophozoites become attached to the inside of the dog’s body (to the side of the intestinal wall). After a period of time the Trophozoites start to reproduce and will then transform into the cyst form. Once the cysts have formed they will then be excreted in the dog’s poop (feces) and after they have been consumed by a passing dog or animal the cysts will be ingested and after opening in the dog’s small intestine the whole process will start again.

It is estimated that the period from when a dog is infected and when the cysts are excreted is about 8 days.

Symptom Of Giardia In Dogs

Although some older studies have estimated that the infection can affect 10% of dogs living with the family, 50% of puppies and as many as 100% of dogs living in kennels most dogs infected with Giardia do not exhibit any symptoms. If a dog does show signs of the infection symptoms can include diarrhea, lethargy, vomiting, the stools may appear soft and the affected dog may appear in poor condition or experience weight loss. Other symptoms can include stools (feces) that smell particularly bad, there may also be mucus in the stools and the feces may appear pale in color. If the affected dog is experiencing severe diarrhea the owner may notice blood in the feces.

Diagnosis For Giardia In Dogs

Although a vet will normally diagnose a dog that is experiencing a case of Giardia by examining characteristic organisms in the dog’s feces – it is very difficult to detect the cysts through a routine check or examination. The vet will also need to rule out any other possible infections that may have similar symptoms to a case of Giardia i.e. Inflammatory Bowel Disease and digestive problems.

There are three accurate methods of diagnosing giardia in dogs including the zinc sulfate concentration method, the smear test and the ELISA (enzyme-linked immunosorbent assay test).

This method uses a dye to clearly detect whether there are any cysts in the dog’s feces.

ELISA (enzyme-linked immunosorbent assay test) – This technique tests for antigens that are released by the giardia organisms during an infection.

Fecal smear test – This is one of the more simple methods for diagnosing giardia in dogs and will involve the vet closely examining the dog’s feces under a microscope looking for characteristic organisms seen with a giardia infection i.e. trophozoites.

Prevention Of Giardia In Dogs

To help prevent your dog from becoming infected it is important that owners do not allow their dog to drink water that could be infected. For example a pond that is near a common dog walking area maybe more likely to be infected (this is because dogs that have been walked in the area may have defecated near the pond causing the infected feces to contaminate the water).

Treatment For Giardia In Dogs

Treatment for giardia in dogs and puppies is normally through the vet prescribing a course of Metronidazole (which is estimated to be effective in two thirds of cases). If a course of Metronidazole is not effective the vet may opt to start a course of Fenbendazole or combine both the medications together. It is also important to mention that there is also a vaccine for giarda that can be prescribed (although some experts do not consider it an effective agent in stopping the infection from developing if the puppy is exposed to the infection).

It is also very important that any dog suspected of being infected with giardia is washed thoroughly as the fur and hair can contain infected cysts.