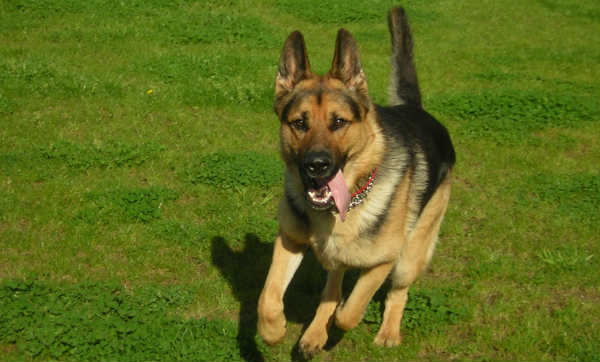 Hip dysplasia in dogs and puppies can be caused by a variety of factors and is classified as a Polygenic trait (this basically means that the cause of the condition is controlled by more than one gene). So an affected dog maybe more predisposed to the condition due to genes passed down through inheritance with environmental factors also a possible trigger.

The hip joint is formed through the femur (thigh bone) and the ‘ball’ at the end of the femur fitting neatly into the hip ‘socket’ (or Acatabulum) at the side of the dog’s pelvis. The hip joint is actually known as a ‘ball and socket’ joint for this reason. The muscles and ligaments will then hold the joint in place.

Hip dysplasia in dogs and puppies occurs when the ball at the end of the femur will not fit tightly into the Acetabulum due to it being shallow and poorly developed (you can see how this can happen in the photo above). As the dog continues to walk on the affected joint the added weight and stress will put too much pressure on the connective tissue and muscle causing further instability leading to the joint becoming looser and more unstable.

Causes of Hip Dysplasia in Dogs

Obesity is a common cause of hip dysplasia in dogs for an obvious reason. If a dog is constantly fed a high calorific diet or is fed scraps from the table (or simply too much food) as the dog puts on more weight this can add more stress to the hips. All owners should speak to their vet if they have one of the breeds more predisposed to the condition so that the chances of their pet developing the condition are reduced.

Calcium & phosphorous imbalance… It is also important to mention that a diet that is not properly balanced with the correct calcium and phosphorous can also lead to poor bone development in dogs and puppies.

Exercise given to young dogs and puppies during the age of rapid bone growth can also lead to the condition. To prevent the likelihood of a young dog or puppy from developing the condition owners should avoid walking their pet on hard surfaces (during the stage of rapid bone development) and also discourage their pet from jumping and landing on their back legs i.e. standing up against a fence, on your leg or jumping up and landing on their back legs when attempting to reach a ball or toy during play-time.

Genetics – as previously mentioned is the leading cause of hip dysplasia in dogs and puppies. A dog that has hip dysplasia will be born with hips that appear healthy but after a period of time the structure of the hips will start to change. As the condition develops the puppy will start to experience and show pain around the hip area when attempting to walk and may also start limping or sway when he or she walks around. An affected puppy may also struggle when he or she attempts to use their hindquarters (for example when the puppy attempts to raise itself off of the ground) or jumps up.

Puppies with hip dysplasia can also experience pain when the owner presses on their rump leading to the pelvis dropping. Puppies with the condition may also not be able to extend their legs into the frog-leg stance without the affected puppy experiencing some pain.

Diagnosis for hip dysplasia in dogs and puppies can only be effectively achieved through an X-ray of the hips and pelvis. Due to the pain that a thorough X-ray can cause, the dog or puppy will need to be anesthetized and placed on their back with the legs extended and placed in a parallel position. A hip in good condition will have the femur fitting nice and tightly into the socket (there should only be a very small amount of space between the femur and the acetabulum).

After the dog or puppy has had their X-ray the results should then be submitted through the Veterinary Association and Kennel Club to the hip dysplasia scheme (this scheme was established to help reduce the possibility of dogs developing the condition by encouraging breeding with dogs free from the condition).

The X-ray will then be given a KC registration number for that individual dog or puppy where the X-ray will be examined by a panel of specialist vets. Each X-ray will be thoroughly examined with a score given to each part of the hip joint depending on how it is shaped and structured. Each hip can have a maximum of 54 points each (ranging from 0-54), so a total of 108 points for both hips.

The lower the score for both hips the better – so if your dog is scored 0:0 (so zero for both hips) this is the best score a dog can be given. If a dog is given a score of 8 points or below then this is considered an acceptable score for breeding. If you do purchase a puppy (that is one of the more susceptible breeds) then you should have both the parents examined (X-rayed) and scored through the hip dysplasia scheme.

Quick Guide To The Scoring System

Mild dysplasia will show a slight increase in the space in the hip joint (mild subluxation).

Medium dysplasia will mean that the hip ‘ball’ is only barely sat in the acetabulum. Arthritis may also have developed.

Severe dysplasia will cause the head of the femur bone to be completely out of the hip joint. Arthritis will also have developed.

Treatment for hip dysplasia in dogs can be through medication and surgery. However if a puppy is experiencing a very mild case then if exercise is restricted and the owner pays close attention to the puppy’s diet then it is possible that the hip joint could stabilise.

Dorsal acetabular rim arthroplasty is another operation that can be performed – through surgery the acetabular rim is slowly built up through the vet taking bone from other areas. This type of surgery is still in it’s early stages and is in need of further research.

Femoral head and neck excision arthroplasty surgery is sometimes undertaken on dogs that weigh less than thirty six pounds. This operation is where the head of the femur is removed but the joints can still be joined through the fibrous tissue.

Pectineus myectomy is another operation that is one of the more simple surgical procedures – this operation will remove some of the pectineus muscles which can alleviate some of the pain and reduce the chances of joint disease from progressing.

We hope you found our guide to hip dysplasia in dogs and puppies useful as it is a particularly debilitating condition that needs to be treated to alleviate some of the symptoms whether this is through medication or surgery.