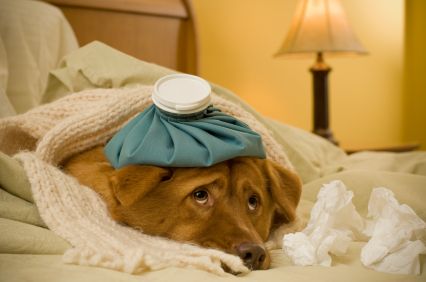 Heartworm signs symptoms in your canine are caused by the mosquito bite, so if treating mosquito bites on your dog it is always a good idea to take your dog to the vet straight away…

Although swelling may occur around the bite,  symptoms of the disease are very hard to spot so the disease is often a silent killer…

On this page we have aimed to provide the best tips to at least recognize some of the symptoms and how to treat it.

Unfortunately canine heartworm symptoms are almost impossible to detect in it’s early stages and it is often too late before the owner realizes that their dog has the disease. In it’s later stages your dog may show some of the following symptoms but it can vary from dog to dog…

Sometimes dogs that are particularly active may show signs of the disease earlier, including coughing during exercise.

As previously mentioned the heartworm signs of disease are difficult to spot so may go unnoticed in it’s early stages which will obviously prevent your dog from being treated effectively. Unfortunately when the disease has become noticeable it maybe too late to save your dog’s life…
Preventative Treatments

However, there are some pretty good preventative treatments out there that can prevent the parasite from taking hold in your dog…some of the treatments are listed below…

These have been estimated to be as much as 99% effective at killing the parasite.