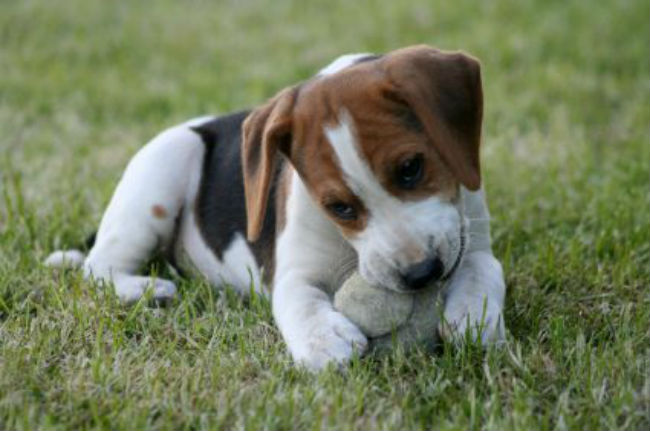 Puppy development is an ongoing and gradual process physically and emotionally.

We have included the best free puppy training tips to understand puppy behavior from birth to 12 weeks of age.

A puppy is a pack animal and learns the initial lessons through play & mimicking what is around him.

By the age of 8 weeks a puppy has learned crucial lessons from his mother and other siblings and it is up to you to mould him into a dog that is well balanced and well behaved.

Puppies are born into this world as a ball of fluff and completely blind and also deaf, and if you have ever watched a litter of small cute puppies they spend the first four or five days of their life eating and sleeping.

This part of puppy development is known as the neonatal phase and it normally lasts for about two weeks.

From about two weeks of age and for about a week the transitional stage happens. This is where a puppy develops his senses including his smell, sight and hearing.
This is when a puppy will start to assert himself and may even start showing puppy behavior problems, he may even growl and start walking about.

It may seem early but you can start puppy obedience training even at this early stage.

Start petting and cuddling your puppy so that he gets used to being around you but also starts to recognize your smell but don’t be too intrusive!

Although it is ok for a puppy to be around the family, it is also important that you don’t disturb your puppies family (the litter) too much, never allow strangers to start approaching the puppy when he is in the litter-so no strangers, however tempting it may be to show your puppy and the litter off.

Your puppy’s character starts to shine through and develop from around the fourth week.

From the fourth week through to the seventh week puppies senses are fully developed and impressions that they interpret from their environment shape their further development.

At around the fifth week puppies start to intensively learn things about their environment and how they should behave. A puppy will start romping with his siblings, learn important aspects of the dog language, and also learn particular gestures and movements which he will need to use in later development as he gets older.

Puppy obedience training starts in the litter as a puppy’s mother will be will be promoting positive puppy development by only allowing certain behavior. A puppy knows by instinct not to potty in his box.

He will also learn the bite reflex and how much pressure he should use when closing his jaw. These are all very important aspects of training that need to be completed for a puppy to develop into a well balanced adult dog.

It is a good idea to start puppy socialization around the fifth to the seventh week – start by introducing your puppy to other members of the family or friends-but do it very slowly and very gradually – start with one person.

It is crucial that his early experiences with people and other things around his environment are positive as a very young puppy is very sensitive to what is going on around him.

If a puppy is teased or treated badly at this vital stage it could possibly cause major issues in a puppy’s development and how he interacts with you and other humans as he get older.

It is also a vital stage during the fifth to seventh week that a puppy develops a positive attitude towards children – if fear develops now it could possibly last.

During this phase of a puppy’s development the ranking phase starts and learning their place in the hierarchy.
From the eighth week when a puppy is away from his litter and introduced to you or the owner he is ready and willing to learn.

He will be playful but also wants to learn rules-so the training should now become more intensive and last slightly longer.