The Dog Owners Guide To Removing Ticks from Dogs 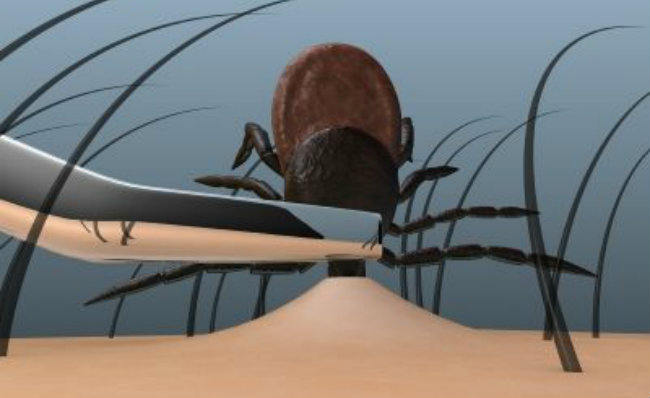 When removing Ticks from Dogs you need to take your time and not rush the removal process. Due to the fact that the Tick will be feeding and engorged deep into your dog’s skin it is very easy to make the mistake of leaving the head in once you have attempted to extract it. As you can see in the tick photo above Tweezers have been used to remove the parasite. Although this tool is very often used by dog and puppy owners it actually is not the best way to remove them.

Generic Info About Ticks On Dogs

Ticks are members of the Arachnid family and are not classed as Insects. Other members of the Arachnid family includes Spiders such as the Scorpion. An adult Tick can give birth to 2,000 eggs and sometimes as many as 5,000. Ticks can carry Lyme Disease which they can pass on to humans one they have been engorged and feeding for over twenty four hours. The symptoms of Lyme Disease come in three stages, which we will get into more detail about below.

The symptoms associated with mid-term Lyme Disease may take weeks or even months to materialize. If you or your dog have been treated by a Doctor or Vet then the symptoms may not occur – in over 60 percent of cases that have not been treated during the initial stage the symptoms can include…

The Final Stage or Later Symptoms of Lyme Disease

Although some people prefer to remove Ticks with Tweezers we would advise you to use a Tick Twister similar to the one pictured above. If you choose to use Tweezers make sure that you place them as close to the skin as you possibly can and twist the Tick as opposed to pulling it as this may just pull the body out leaving the head still embedded which could lead to infection.

Some people choose to rub Vaseline on the Tick before they attempt to remove it. This is not recommended as this may encourage the Tick to regurgitate it’s last meal into the host i.e. you or your dog – and this will go straight into the blood stream.

We recommend using a Tick Twister when removing Ticks from Dogs…

1. Start by purchasing a few Tick Twisters as they come in different sizes and you want to be able to remove the parasite when it has recently attached itself and has not become full with blood. However, you also want to have a larger Twister so that the parasite can be removed when it has become full.

2. Place the Twister along the skin so that the legs are over the two prongs.

3. Once you have done this, gently twist and pull the twister and the Tick will come away from the host nice and easily.

4. Place some antiseptic cream on the bite mark and kill the Tick. Put the parasite in a Jar so that if you develop any symptoms of Lyme disease you can show the Tick to your Doctor or Vet.

Dog Health Problems Online > What Do Ticks Look Like? > Removing Ticks From Dogs