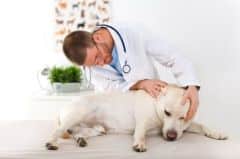 ]]> Valley fever symptoms in dogs is a nasty condition caused by a fungal infection. which affects your dogs lungs causing a variety of problems (more on this later).

The fungal infection that causes this condition is found in specific areas of the US including Texas, California, Arizona and as far south as New Mexico. Although this illness is quite unpleasant and will need your dog to have extensive medical treatment from your vet it is not life threatening.

This disease is not contagious and is found in two varieties ‘Mild’ and ‘Disseminated’. Read on to discover the causes, symptoms, diagnosis and treatment for this condition…

Causes of Valley Fever in Dogs

Valley fever symptoms are caused by a fungal infection referred to as ‘Coccidioidomycosis’. The fungal spores that cause this illness are often found in dry hot sandy areas of the US – particularly South West America where there is little rain. Canine valley fever symptoms will normally start after your dog has inhaled the fungal spores – this will then lead to the infection taking hold. A dog that has a weakened immune system (one that has been recently ill) is even more susceptible to the disease.

Valley Fever Symptoms
As previously discussed this illness comes in two forms ‘Mild’ (also referred to as ‘Primary’) and ‘Disseminated’. The mild form will normally attack a dog’s upper respiratory system (the lungs) and even the Lymph Nodes with the early symptoms including…

In the later stages valley fever symptoms can start to affect other areas and organs in your dog’s body. This is when the illness becomes more serious and can be fatal if not treated early – this is referred to as ‘Disseminated’ Valley Fever. This type will involve the infection attacking the lower and upper respiratory system. Symptoms will include…

A vet will normally undertake a thorough physical examination of your dog to check that it is valley fever symptoms that your dog is experiencing and not something else.

A vet will also be able to gather evidence for a successful diagnosis by looking into the geographical area that your dog lives. For example if your dog lives in the South West where the infection is known to exist then it is more than likely that the vet has either come across a dog with the condition before or is aware of it’s symptoms. It would of course be more problematic to make an accurate diagnosis if your dog does not live in areas where the infection is known to exist.

An accurate diagnosis can also be achieved through examining what type of valley fever symptoms your dog is experiencing – for example a dog that exhibits the more unusual symptoms such as swollen joints, limbs and problems affecting the Lymph Nodes then it more likely that your dog has Valley Fever (of course this is not always the case but an experienced vet will be able to determine the likelihood of your dog being infected with the fungal spores that cause this illness.

It might be necessary for the vet to undertake lab tests to examine your dog’s blood and determine anti bodies that have been triggered by the fungal spores. A chest X Ray might also be requested. It is vital that this condition is treated in its early stages as the later more deadly variety can be fatal of not treated quickly.

The treatment for Valley Fever Symptoms is prolonged (with the Mild variety sometimes needing six to twelve months of medical treatment and the Disseminated sometimes needing even longer). Each variety may need a variety of different treatments depending on how your dog responds to each treatment.

A vet will normally aim to treat the respiratory symptoms with specific medications and also treat any fever, coughing and breathing difficulties at the same time. At this point the vet may also prescribe anti inflammatory medications to counter act any swollen joints or limbs.

The main treatment fir this condition will include anti fungal medications – these can come as oral capsules and will need to be administered by you or your vet as prescribed. Common anti-fungal medications include…

If the above anti-fungal medications do not work then the vet may prescribe Amphotericin B.