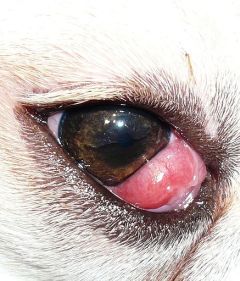 Unfortunately the Boston Terrier are predisposed to specific health problems which is thought to be due to a genetic vulnerability.

Eye problems – As you can see from the pictures they have quite large ears, eyes and a short snub muzzle and due to their protruding eyes they need to be checked regularly for any foreign objects including grass seed as seeds could cause the eyes to become irritated.

Listed below are some of the eye disease problems that this breed may have or develop due to their large and protruding eyes.

This breed are also quite susceptible to cold and hot temperatures as they really do not like cold or hot weather. Due to their shout snout they are more prone to snoring and what is called a reverse sneeze – this is when they take a quick and repeated inhalation through their nose and then gagging and snorting to clear their palate of any mucus.

Stomach problems – Other health problems to affect the Boston Terrier can include stomach gas and a build up of gas in the intestines. 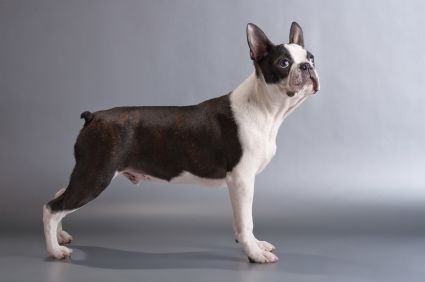 Brachycephalic Syndrome – As previously mentioned this is a common health problem to affect the Boston Terrier due to their short snub muzzle causing a resistance in airflow.

Ear Problems – Due to the fact that this breed has very erect ears they do have less problems affecting their ears (most notably ear yeast infections) which have more of a tendency to affect dogs with droopy ears. Boston Terriers can be more prone to sensorinneural deafness. Patellar Luxation This is when their is a rupture in the cruciate ligament, symptoms may include limping and of course pain. 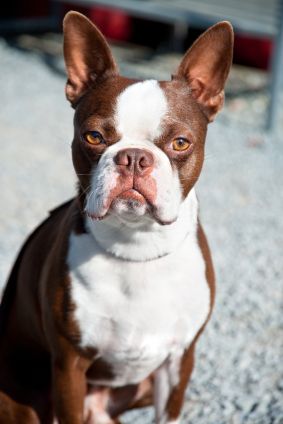 Hemivertebrae problems -The Hemivertebrae are bones found in the in the spine and are not shaped in a normal manner. This can lead to spinal cord and nerve damage.

It is thought that this problem is due to the screw like tail found in Boston Terriers (and other breeds).This is inherited and is more commonly seen in Brachycephalic breeds. Hemivertebrae problems can also lead to incontinence problems and Ataxia (this is a problem that affects the legs and can lead to problems when walking). This is also a very painful condition and will need pain control prescribed by a medical professional.

Why not take a look on the right hand side of our page for more common health problems to affect Boston Terriers.

Information on the Red Boston Terrier…

Below we have provided a list of other common health problems to affect the Boston Terrier breed.

Cushings disease is another quite serious health problem to affect Boston Terriers. This condition is also sometimes referred to as Hyperadrenocorticism.

A common cause of this condition is through Pituitary Gland Tumors and Tumors affecting the Adrenal Glands.

It is worth mentioning that the Tumors do not need to be cancerous to cause problems. In fact benign Tumors can also affect the amount of Cortisol being produced.

Cherry Eye is another health problem to affect Boston Terriers…

Cherry eye arises when a pink shiny protrusion develops in the corner of the eye. It is not considered dangerous and can be seen in other breeds including Beagles and Cocker Spaniels.

The best form of treatment for Cherry Eye is through the use of anti-biotics and in rare occasions surgery maybe used to reposition the gland.

It is very important that the tear gland is saved as the tears are what keep the eye clean and bacteria free.

Weight – The Boston Terrier can vary in weight from 15-25 pounds.

History – Boston Terriers were originally bred in the 19th century and are thought to have been bred from English Bulldogs and English Terriers.

Coat – The coat is short, glossy but quite thick and only needs to be brushed once a week.