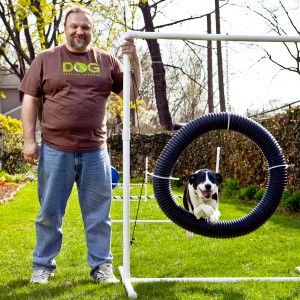 In this section we have been fortunate enough to interview Eric Goebelbecker (seen above) a very successful dog trainer who also serves on the Board of Directors of the International Association of Behavior Consultants. So lets get started…!

Q1: Eric, you play great emphasis on using body language, eye contact and communication when dog training, could you go into more detail about this and how new dog owners can use these techniques?
Animal training is communication. Regardless of the methods or techniques you employ, you are telling the dog what behaviors you want more or less of.  You are also getting feedback from the dog too – while we could definitely debate whether or not the messages are intentional, our dogs are “telling” us why they are or are not complying with what we want them to do.

Q2 Eric – what are your views on Cesar Millan, his dog training techniques and methods?

I can’t say that I am a fan. I’ve written a few commentaries on his show, and in so doing spent a lot of time watching and re-watching episodes. Many more episodes than I did commentaries on, but decided to at least put the commentaries on hold since I didn’t want my blog to end up being one of the many that spend more time talking about Cesar than anything else.

Many dog professionals, including his critics, talk about Cesar’s great handling skills. After watching a lot of the show, I’m not even sure about that. He seems to be amazingly tone-deaf when it comes to seeing the difference between a dog that is “calm and submissive” and a dog that is just plain shut down and overwhelmed. (To be clear though, many of his critics refer to the dogs he handles as experiencing “learned helplessness” – I am not saying that. I think they need to go back and re-read the research on that alleged phenomenon.) Cesar will often focus on one aspect of a dog’s body posture, such as a tucked or wagging tail, and ignore that rest which is a typical rookie mistake.

But my biggest complaint is his constant babbling about the “pack leader.” He doesn’t just not understand dog behavior, he doesn’t understand wolf behavior either.

There have been several studies of dogs living free in areas such as Africa and South America in the past decade or so. They live in very loosely formed groups and lack a clear leader. The leadership, if there is any, tends to shift based on the situation. The dogs only work together when it is advantageous for them. Is it advantageous to work with someone who always insists on being first and enforces it by poking your neck and pinning you to the ground?

Meanwhile wolf packs are family units. There is no struggle for power. If a wolf wants to be the boss, he or she forms their own pack. Cesar consistently characterizes things as a struggle for dominance over the pack. This struggle just doesn’t exist in nature.

Q3 We get many questions regarding the best methods and techniques to use when puppy crate training – could you give our readers a few tips – maybe even a brief guide?

Basically it boils down to making sure the crate is a happy place and making sure he has adequate attention and exercise before you put him in there for too long.

Q4 Many dog trainers have conflicting views regarding playing tug of war with their dog’s as it may train their dog to be over dominant – what are your views on this?

When you play tug, make sure you play by the rules:

1) The toy is released when the dog is told to release it.
2) Teeth never touch the person or the person’s clothes.
3) The toy is only taken when permission is given.
4) The human is responsible for keeping things under control.

Q5 What are your views on negative reinforcement? What do you think about dog owners using spray collars and even shock collars?
In general I don’t use a lot of negative reinforcement. There are times where is in an operation – stepping on a leash when a dog is jumping up too much or won’t hold a down during a class for example, but it’s most associated with much more aversive techniques than I normally use.

I have never used a citronella collar myself. I have seen a few owners trained to use it by other trainers I trust and it was effective. I don’t see it as an “all-purpose” tool though. These were for very specific circumstances where the remote administration of an aversive stimulus solved a very specific problem. (None of them involved barking, by the way.)

I don’t use shock collars and have no experience with them.

The real interesting part of your question though is “dog owners using.” I find the idea of people buying these tools online or off-the-shelf and using them without any training a little disturbing.

I love the idea of people training their dogs themselves and much if my website is geared toward the DIY dog trainer. I have plans for adding even more tutorials. But both of these tools – the remote collars – have tremendous potential for bad side effects. I’d rather see them combined with some expert training.

Q6 If you could own a dog breed that is the easiest breed to house train what breed would you choose?

LOL. I have no idea which breed is the easiest to house train, but I can tell you all about problems with Yorkies, Chihuahuas, and Bichons! I guess if I had to make a choice I’d gravitate toward my personal favorites – “medium-sized” mixes of breeds like Border Collies, Aussies and Labs. I’ve never encountered issues house training these breeds that didn’t originate with the people being inconsistent.