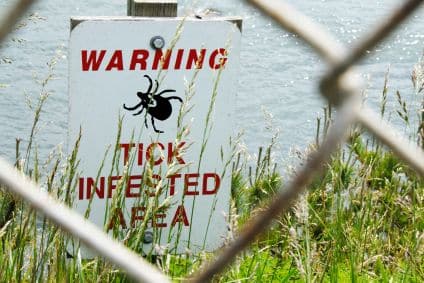 On this page we have provided the best treatment, cure, test & advice from specialists.

The disease & rash is caused by a tick bite often from deer ticks, with lyme or lymes disease a very serious condition that needs to be treated very early…we will explain why…

The first symptoms are sometimes written off as a case of flu as the person or dog who has been bitten may not even recall the tick actually biting them.

Sometimes it is reported that all cases of lyme disease get the classic bullseye rash, which you can see below. This is not the case with the rash often only appearing in 30% of cases. So just because you don’t have a rash doesn’t mean you don’t have the disease. This is why early treatment is vital!

If the disease is left untreated or not treated properly the symptoms can come and go over a period of weeks or months. Sometimes recurring years later.

As previously mentioned the classic bullseye rash doesn’t always appear so if you are showing any of the later symptoms of lyme disease get urgent medical attention fast.

For detailed advice on the cause of lyme disease take a look at our section on the effects of a deer tick bite.

Below are listed a collection of the early and later symptoms of lyme disease that you should be aware of.

Cause of Lyme Disease

Lyme disease is caused by a tick bite, normally by the dreaded deer tick. The infection is also caused Lyme borreliosis and is caused by the bacterium Borrelia burdorferi.

The most risky time to get bitten is during the summer when the nymph is most active normally from late may up until june. A deer tick is not initially infected with the disease but will normally catch it on its first or second meal, it will then pass the disease on to the next unfortunate victim, which could be you or your dog if you are unlucky enough to get bitten.

Treatment for this infection will normally invlove antibiotics including: Doxycycline, Amoxicillan or Cefuroxime. Using this treatment will normaly cure the disease in most cases but not all.

We would like to say thanks to Jim wilson from www.canlyme.com for the use of the bullseye tick bite pictures.