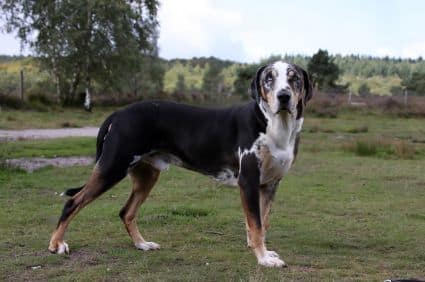 The Catahoula Leopard Hound or (Louisiana Leopard Dog) is actually not a Hound at all but a Cur. This breed were often used by owners to hunt and kill wild Boar.

This breed are named after a Parish in Louisiana and are now the registered breed of that state thanks to the Governor Edwin Edwards signing a bill to that affect in 1979.

Below we have provided all the details about this breed that any dog owner will ever need.

The Catahoula Leopard Hound is thought to have a genetic heritage linked with the Greyhound and Mastiff. As you can see from the picture above their coat is highly distinctive and is normally a Merle, grey, white or black and tan color. The Leopard name refers to the fact that the ‘Merle’ gene can cause the patchy appearance. Their paws are quite big and are webbed between the toes (this makes them excellent swimmers, they have a skull that is quite wide but also reasonably flat in comparison.

The eye color of this breed can vary greatly with no particular color the same from dog to dog. Colors vary from blue, blue and white, grey, blue and green, brown and even amber.

The ears lie flat to their head – consequently they are more prone to yeast infections (because of the warmth and perfect temperature for bacteria).
This breed will normally grow to a height ranging from twenty up to twenty six inches. They can also grow to a weight of fifty up to ninety pounds but males average about sixty to seventy pounds.

The coat of the Catahoula Leopard Hound can vary greatly – including a coarse coat, slick coat or woolly coat. The coarse coat is easy to maintain but can become rather full when it gets wet or damp. The slick coat has very short hairs and is very different to the appearance of the coarse coat. The woolly coat is deemed by some owners as the least desirable of the three as it is a double coat and can appear rather shaggy and unkempt.

The Catahoula leopard Hound is very intelligent and will need lots and lots of exercise. You need to remain top dog and alpha male otherwise you will lose the respect of your pooch. This breed need to be well socialized and do not respond to being left on their own for long periods.They are quite assertive and are not known to display aggressive behavior. This breed are considered good with children and will incorporate the children into their pack. However, it is always good to raise this breed with children rather than purchasing one and bringing it into an established family.

If you do not exercise your dog regularly then you can expect problems including digging, chewing and other destructive behavior. Although this breed love to play you need to remember that they are large and could cause injury through accidental bumping or over zealous behavior.

This breed were initially used to hunt and herd animals such as Cattle – where they would work in a pack of three. They are sometimes referred to as the Catahoula Hog Dog as they were often used to hunt and kill Wild Boar.

Hip Dysplasia – This is another condition that the breed are more prone to which can lead to lameness and Arthritis.